There does not seem to be even a small ray of sunshine on the horizon for a quick end to the CN Rail strike. So far CN management has been able to keep some trains running, but anything like regular traffic is being strangled at several choke points. 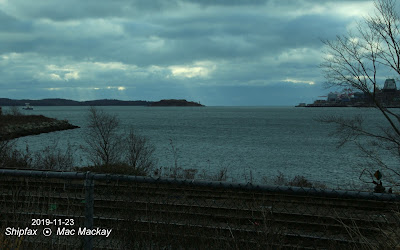 Halifax is totally dependent on CN to move a major proportion of its traffic in and out of the port, and there are already signs that some of that traffic is grinding to a halt. The empty tracks in Dartmouth (in the foreground of the photo above) may be misleading however.

CN has announced that it is laying off staff at Autoport (which it owns and operates). There is lots of storage space for incoming autos, and the port's longshoremen unload the import cars from the ships (they are not CN employees), so it is difficult to understand the move. Loaded auto rack rail cars were still leaving Autoport as recently as this morning, and auto carrying ships are still calling. Cars are one commodity that can be moved by truck, but obviously in much smaller quantities.

National Gypsum depends on CN rail to transport the ore from its mine in Milford to its ship loading facility in Wright's Cove (Lower Burnside) Dartmouth. While the company has a large stockpile on hand, it still depends on one or more trains per day to replenish the supply. National Gypsum also ships raw gypsum to other customers inland by rail.

CSL Tacoma inbound this afternoon to load at National Gypsum, while the George Washington Bridge sails outbound with containers.

Container traffic will be hard hit by a prolonged strike as import and export cargo gets hung up in terminals or en route. Very little of the port's container traffic is locally generated, so rail is critical to get the boxes to or from producers - mostly in the US midwest, and central Canada. Rail cars were still moving in and out of Halterm today, so it is hard to tell how much delay there may be. Container shippers have the option of using other ports if they can get better service from a different railroad. 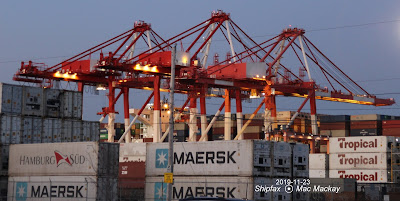 CMA CGM Chennai under the cranes at Halterm today, but when its import boxes move from the pier may be a question.

Break bulk shippers may have options, but not all. Nirint's JSP Levante sailed today after discharging bagged nickel sulfides which are shipped onward from Halifax in open gondola cars to Fort Saskatchewan, AB (25 km outside Edmonton) for processing. The cargo can be held in Halifax for a time, but warehouse space would eventually run out and the mine in Cuba would not be able to ship their output.  (Fort Sask is served by both CN and CP Rail however.) 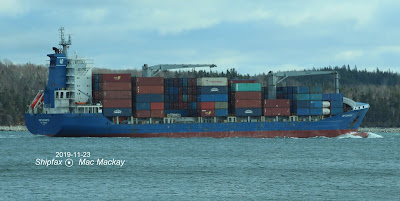 The Cuban nickel is just about the only break bulk import cargo Halifax gets. The only other significant break bulk cargo is rail for CN itself. It is generally stockpiled on the pier itself until needed.

So far there has been no appetite for government to step into the labour dispute, but there will certainly be pressure if the strike continues for another week. Moving crops to market, maintaining supplies of propane and stocking store shelves for Christmas will become more difficult in the days ahead.