An unusual (and possibly unprecedented) bulk cargo arrived in Halifax today aboard the CSL ship Baie St. Paul. It is unusual to see the ship arriving in Halifax in a loaded condition, as it usually calls here in ballast and loads gypsum. Today's arrival is direct from Grande-Entrée, Magdalen Islands, another of the ship's regular ports, where it loaded a cargo of salt. 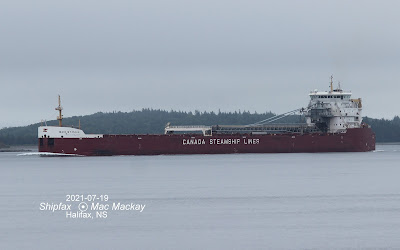 Before tying up at Pier 9C the ship transited the Narrows into Bedford Basin where it turned round then proceeded back to Pier 9C, docking starboard side to the dock. In very short order the ship's boom was swung out over the dock and unloading began. 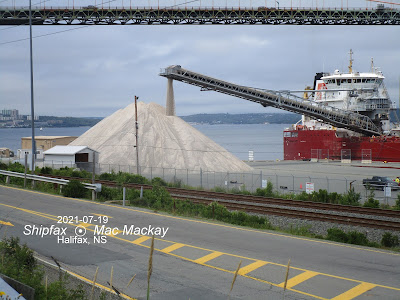 According to CSL's specification sheet for the vessel it can unload at a rate of 4,000 to 5,000 tonnes per hour, and has a capacity of about 35,000 tonnes, or 41,917.96 cubic meters. By late afternoon the ship had completed unloading, with the cargo neatly deposited on shore. 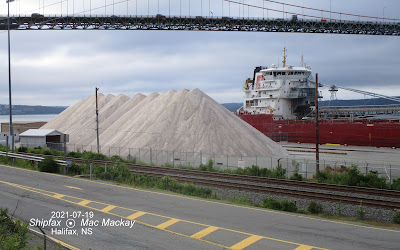 The pile of salt will be surrounded by straw bales to contain erosion, and water cannons have been positioned to suppress dust. I expect it will be trucked away to some other destination(s) over the coming weeks. The tiny shed to the left of the salt pile is one of the Port's de-icing salt storage cribs, so it is unlikely that all this new load is for the Port.
With unloading completed, the Baie St.Paul sailed for the Magdalen Islands, again presenting an unusual sight of this ship sailing in ballast. 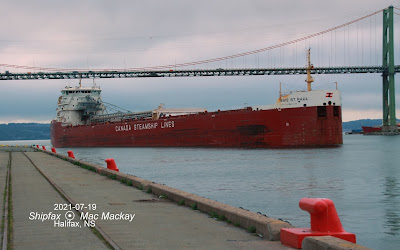