A pair of unusual callers passed each other coming and going this morning, July 13. The first ship to arrive was MSC Melissa, en route from New York to Montreal. The ship anchored in the lower harbour, did not work any cargo, and sailed within four hours. Although there was no notice that it was undergoing Asian Gypsy moth inspection that may have been the reason for its visit.

The arrival of the next ship was timed so that they could meet conveniently, with the inbound ship taking the western channel. 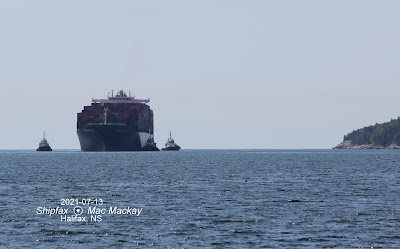 Its visit today is for THE Alliance's EC5 service, which normally would be handled at Cerescorp's Fairview Cover terminal. However the ship is too large to pass beneath the harbour bridges and will instead berth at PSA Halifax. Although it is uncommon, the two competing terminals do cooperate from time to time. They are expected to do so again later this month when soister sip Aristomenis ex Hanjin Netherlands will also call at PSA Halifax. Rumours persist that PSA will acquire the lease on Fairview Cove, but nothing has been conformed.

Once Navios Constellation had reached the area off PSA Halifax, MSC Melissa was outbound in the main channel. 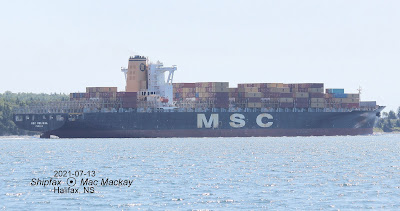 Shooting directly into the sun posed problems for photos - hence the odd coloration of the above images.
.