It was a busy day at PSA Halifax today, July 7, with three ships working and a fourth alongside. The newly extended seawall - still called Pier 41-42, accommodated the three working ships. 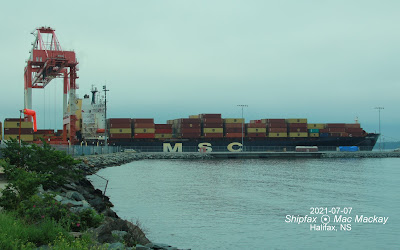 MSC Annick arrived yesterday and occupied the southernmost (seaward) end of the pier. It sailed this evening for Montreal, having reduced its draft sufficiently for the St.Lawrence.

The mid berth was occupied by X-press Irazu sailing for Melfi Marine on its Cuban service. There was some concern earlier that Cuba's perilous financial state might result in elimination of this service. It has been cut back to this one ship, which is due next on August 18 from Livorno / Genoa /  Barcelona / Valencia / Setubal for Mariel.

The north berth - Pier 41 - is occupied by Oceanex Sanderling on its weekly ConRo service to Newfoundland. It will shift to Autoport tomorrow to load cars.

At Pier 36, but not working cargo, MSC Veronique is still in port and is now due to sail tomorrow for Montreal. The ship must have had some mechanical problem since its arrival June 30.

Staying with the "three" theme, Imperial Oil's number 3 dock was still occupied by the tanker Nord Swift which completed off loading and sailed this evening. 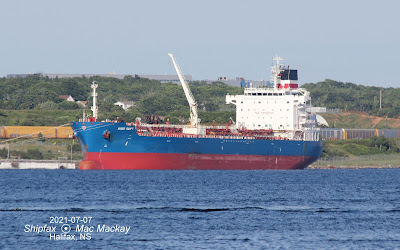 The ship sailed later in the evening, returning toward Houston for orders. Unless it puts well out to sea, it will certainly encounter Tropical Storm Elsa which is working its way toward Nova Scotia. It may be an unpleasant trip.