Today's arrival [July 6] at Autoport is a return visit for the "miniature" car carrier RCC Prestige. When it was last here April 27, 2021 I noted its small size and capacity of 3,900 CEU versus the 8,000 CEU behemoths we usually see.

It is only when compared with other PCTCs at the same dock that it is apparent that this is a much smaller version of what is typical on transatlantic routes. Note the Goodwood's bow extends well beyond the end of the dock. 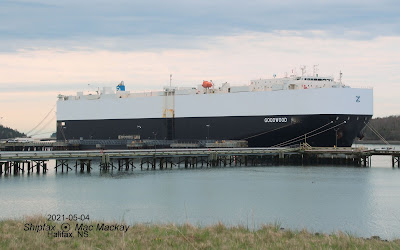 I am tempted to suggest that RCC Prestige was carrying Minis, but in fact it was likely carrying some specialized cargo. Its last port of call was Emden and it is en route to Houston - neither typical ports for car carriers. Prior to that it was in Sparrows Point, USA, a most unusual RoRo port.