There are a number of ships due at Autoport in the next few days - at least three by my count. The first, arriving today was Morning Crown. 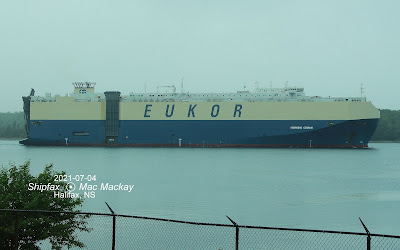 One of the rare Polish built auto carriers, it came from Stocznia Gdanska in 2005. The 57,692 gt, 21,052 dwt ship has a capacity of 6,658 cars. Ownership and management seem to have moved around a bit since built, but despite the Eukor label may now be with Ray Car Carriers.

After discharging cars at Autoport this morning, it then moved over to Pier 31 to unloaded machinery.