ORP Wodnik may be the first Polish naval vessel to call in Halifax. Although Poland has been a member of NATO since 1999, its 48 ships have generally remained in Europe. Well known for its impressive sail training ships, Poland also has the naval cadet training vessel Wodnik which arrived in Halifax today, July 19. 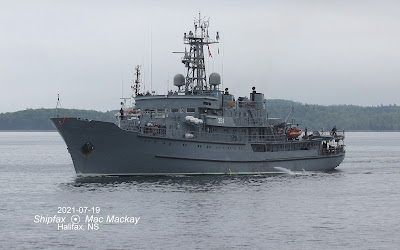 Built in 1976 by Stocznia Polnocnej. in Gdansk, the ship was modernized and upgraded in 2020 by Net Marine Power Service. The 1745 tonnes full displacement vessel has a crew of 65 and can carry up to 100 cadets for training. Based in Gdynia, the ship's last port call was in New York. 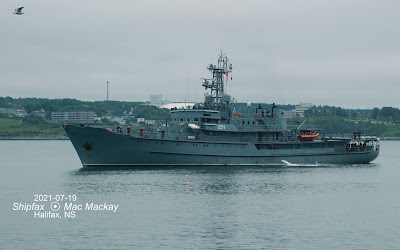 What with today's arrival of HMCS Halifax with a confirmed case of COVID-19 aboard, things may be a little tight at HMC Dockyard, but there are undoubtedly some measures in place to ensure the safety of all aboard and ashore.
At one time ships of the Polish fishing fleet were frequent callers in Halifax, and the ConRo ships of the Polish Ocean line POL, but previously their general cargo ships and the famous passenger ship Batory, were also regular callers. They were always beautifully designed and well kept.
Even the trawlers, which experienced very severe conditions winter fishing off Halifax exuded a certain charm (along with some less pleasant emanations.)
.