IT Intrepid to repair a cable

The specialist cable ship IT Intrepid arrived this evening July 17 to prepare for a cable repair project. The ship, owned by the Halifax based IT International Telecom, is equipped for cable laying and repair and is positioned to respond to cable projects in the eastern Atlantic, coast of North America and the Caribbean. It is registered in Barbados and must apply for coasting license to operate in Canadian waters. The Minister of Public Safety, following a recommendation by the Canadian Transportation Authority, usually grants such a license as no Canadian flagged ship is capable of the highly sophisticated work. 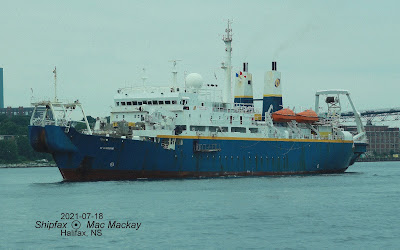 IT Intrepid approached its berth at Pier 9A just as a light drizzle began.

The ship has been tasked with repairing a damaged section of subsea fibre cable in the Bay of Fundy, which runs from St.Martin's, NB to Mosher's Corner, NS. The section, up to the shore end, will be replaced and spliced into the existing cable. A ROV and cable plow will be used, tied into the ship's Dynamic Positioning system.

While in Halifax the ship will load the new cable and board the cable repair crew, including splicing gear. There will be up to seventy people aboard for the work which is to take place between July 21 and 28. On completion the ship will return to Halifax to unload the scrap cable, equipment and personnel.