Yesterday's arrivals consisted of two autocarriers. The first was Don Quijote covered in yesterday's  post. While it was working cargo at Autoport another Wallenius Wilhelmsen ship was unloading machinery across the harbour at Pier 31. It was the Torrens, which moved over to Autoport this morning. After unloading a batch of cars from Southampton, Goteborg and Bremerhaven it sailed for New York this afternoon. 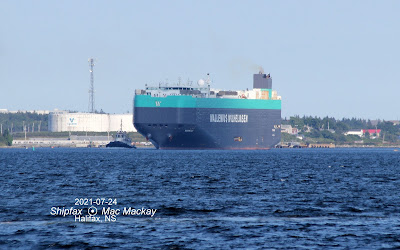 The tug Atlantic Oak accompanies Torrens out of Eastern Passage on its way to sea.

Torrens (a Wilhelmsen ship) is quite different looking from yesterday's Wallenius visitor. Built in 2004 by Mitsubishi HI, Nagasaki it is a 61,482 gt, 21,965 dwt ship with a capacity of 6,354 cars. Among the notable features is the immense funnel (which was enlarged to accommodate a retrofitted exhaust gas scrubber.) Also the position of the starboard side ramp is quite different, in part because the ship has never been lengthened. 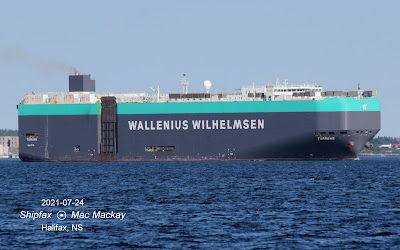 Torrens is not so recently repainted, so its hull shows a bit more wear and tear, including a very strange series of vertical marks well aft. I never saw the ship in its original Wilhelmsen orange hull paint colour, and it has carried the "new" WW scheme since it started calling here in 2020.

The name "Torrens" comes from Australia where Robert Richard Torrens was a government official and premier in the 1800s. Some geographical features and a university bear his name, as does a system of recording land title now in use in many parts of the world. Wilhelmsen has used the name on several of its previous ships to follow their traditional use of the letter "T" to start all their ship's names.