A new facility in Halifax harbour became operational today. General Liquids Canada is part of the Municipal group of companies, the largest road building contractor in the province, and thus a major user of asphalt. They already have a large asphalt storage facility adjacent their Rocky Lake quarry, which is has rail accessed with a CN siding. However this new facility is accessible by water, allowing the direct import of asphalt by sea.

The new General Liquids terminal is not highly visible, as it is tucked in between Imperial Oil and Cherubini Metal Works on the north side of Eisner's Cove in Dartmouth, just at the entrance to Eastern Passage from the main harbour.

There are maps and other reference material available on line:

There is a heated storage tank and support facilities, and a heated pipeline running from the Cherubini dock, which permits asphalt tankers to pump asphalt ashore directly into storage.

Today the tank barge John J. Carrick and tug Leo A. McArthur are delivering the first seaborn cargo of asphalt which was produced by Irving Oil in Saint John, NB. 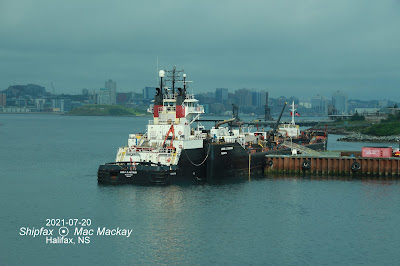 Ironically the tug and barge are owned by McAsphalt Industries Ltd, which is part of the Miller McAsphalt Corp (in turn owned by the French giant Colas SA)  which is actually a Municipal competitor. McAsphalt has its own terminal in Eastern Passage, adjacent to Autoport, which has sea, road and rail access. Presumably the new General Liquids facility will permit Municipal to bring in asphalt from other sources, although there would be draft limitations at the Cherubini dock, which may restrict deliveries to barges.

I have covered the activities of the integrated tug / barge Leo A. McArthur (formerly Victorious) / John J. Carrick (named for the founders of McAsphalt) in this blog and in companion blog Tugfax. See: http://tugfaxblogspotcom.blogspot.com/2017/04/new-name-for-mcasphalt-tug.html