The best I could manage today July 17 was outbound photos of two port callers. Most ship photographers prefer views from forward, but a "going away" shot is better than nothing.

First departure was the Liberian flag, but Russian owned Olympiysky Prospect, built in 2010 by Hyundai, Samho, it is a 62,504 gt, 113,905 dwt Aframax LR2 tanker. Owned by Sovcomflot (SCF) of Russia, it is named for a street in Moscow.

The ship is sailing from Libya with crude oil for Point Tupper, NS and anchored in Halifax for Canadian Food Inspection Agency inspection for Asian gypsy moth. The cargo will be stored by Nu-Star terminals and forwarded to US refineries as needed. Due to its size, and nature of its cargo the ship took two pilots and had an escort tug inbound and outbound.
The ship made the news May 2, 2021 when off Libya it responded to a vessel in distress with 95 people aboard trying to escape from Libya. Instead of calling European rescue ships, it waited for a Libyan vessel to retrieve the migrants and return them to Libya. This action received widespread condemnation in the press.
The other outbound is the much photographed (at least by me) EM Kea sailing from Montreal and bound for Bremerhaven on the joint Maersk (Canada Express) CMA CGM (St-Laurent 1) service. 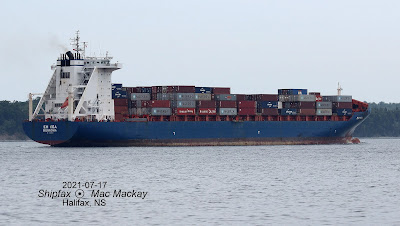 Built by Stocznia Szczecinska Nowa in Poland in 2007 it is a 35,824 gt, 42,166 dwt ship with a capacity of 3108 TEU. It was originally called Cap Norte and renamed Cap Edmont in 2012 for charters to Hamug-Sud. In 2015 it was acquired by a subsidiary of Euroseas Ltd, a 14 ship Greek shipowning and management company. They also manage the ship though their affiliated Eurobulk Ltd.
One of four ships on the service, it is the CMA CGM contribution - the other ships, Maersk Penang, Maersk Palermo, and Maersk Patras (all 2890 TEU) are contributed by A.P.Moller-Maersk.
.
Posted by Mac at 6:56 PM