Fairview Cove operators Cerescorp and shipping consortium THE Alliance continue to push the envelope for larger and larger ships. Today's (July 30) arrival of ONE Helsinki is another example. 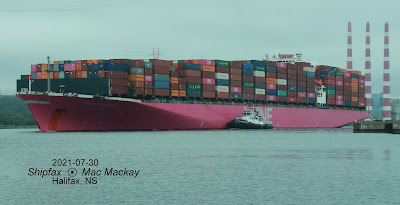 Built in 2012 by IHI, Kure as Helsinki Bridge the 96,801gt, 96,980 dwt ship has a capacity of 8930 TEU according to most sources. K-Line renamed the ship in 2020 as part of the Ocean Network Express amalgamation of the primary Japanese container lines. It is now one of about a dozen ships on THE Alliance's EC5 service. Ships are constantly being changed, and some are too large for Fairview Cove and have been assigned to PSA Halifax. There will also be a number of cancelled or "blanked" east bound sailings as the lines try to maintain schedules as they contend with port congestion and delays. 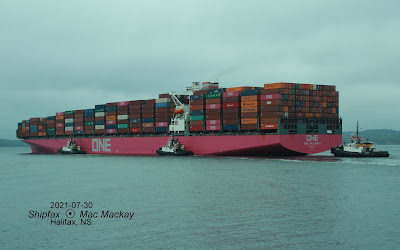 At some point the ship's capacity was increased by increasing the allowable stack height on deck. This was done in part by adding a secondary navigation bridge atop the original bridge.The required forward visibility requirement was maintained while adding at least one more container on most stacks. 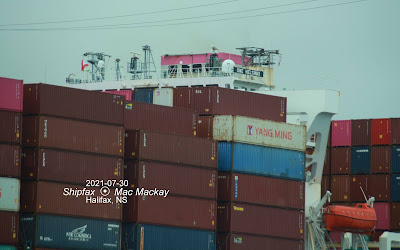 To maintain the lowest possible air draft the height of all fixed equipment was minimized, and various masts and antennas were built to be lowered or folded down. 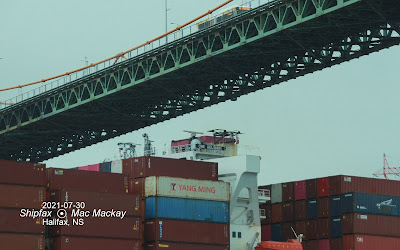 Thanks to this feature the ship was able to squeeze under the MacKay bridge with lots of clearance (at low tide).

For the record, tug assistance was provided by Atlantic Bear as stern tethered escort. Port side: Atlantic Oak. Starboard side: Atlantic Fir, shifting to port side, once into Bedford Basin.