The autocarrier Don Quijote * called in Halifax today, July 23, en route from Zeebrugge to New York. The ship appears in freshly applied paint, believed to have been applied earlier this month while the ship was undergoing inspections in Goteborg. There is some evidence to suggest that its last paint scheme was the EUKOR livery, based on internet photos. 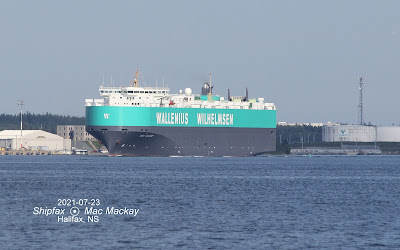 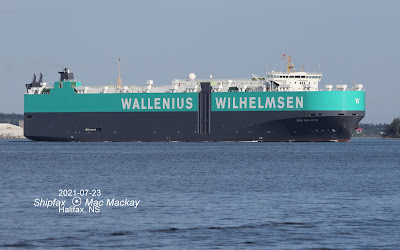 The extension was inserted between the starboard side ramp and the accommodation door, about where the letters "WALL" are located. 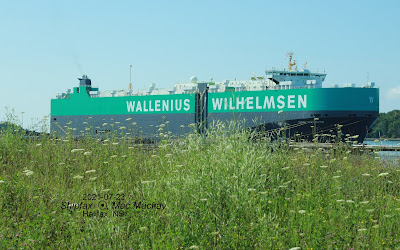 My frequent vantage point in Eastern Passage has grown up to chest height, so I was not able to get a close up view of the paint.
* There have been various spellings of the name of the fictional character in Miguel de Cervantes book - which was written in an older form of the Spanish language. Most spellings try to mimic that old pronunciation,  such as the French Don Quichotte, however the usual English spelling is now Don Quixote - which is really no help at all. Since Wallenius names it ships after operatic characters, it had a choice of a French or a German opera (plus the musical Man of La Mancha), but seems to have chosen neither as its spelling guide. As a Swedish company perhaps Wallenius chose a spelling that would make sense to Swedish speakers.
.