The MSC Lorena arrived today Jul 11 from Montreal to "top up" its container cargo. Due to fresh water and draft restrictions the ship cannot load to full capacity on the St.Lawrence River. Some of MSC's ships also arrive here westbound to "lighten up" before sailing on to Montreal.

It is quite apparent from the photo that the ship could load many more containers before it reached capacity either by volume or by weight. Built in 2006 by Daewoo, Okpo, it is a 59,963 gt, 59,587 dwt ship with a capacity of 4860 TEU, including 560 reeefers.

Later on it was NYK Rumina, a similar sized ship, sailing from Fairview Cove, headed for Port Everglades, FL on THE Alliance's AL5 service. 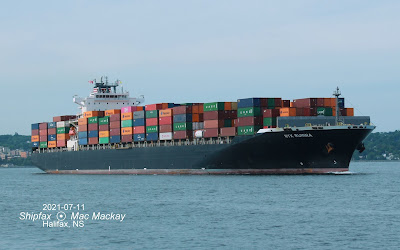 Halifax was its first stop from North Europe, so it is still well loaded. The 55,487 gt, 66,171 dwt ship has a capacity of 4922 TEU, including 330 reefers. It was built by Hyundai, Samho in 2010. It will go on from Florida to Cartagena then to the west coast USA and Vancouver before reversing course back to Europe, via Halifax September 2.