The Danish flag Nord Swift arrived at Imperial Oil's number 3 dock this morning, July 5, with refined product from Houston, TX. Recently Imperial has been importing most of its fuel from Antwerp. 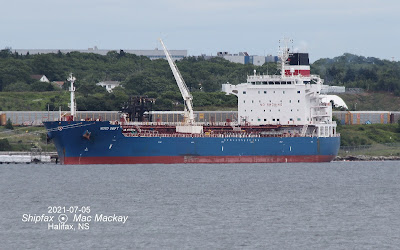 In addition to the usual background of empty autorack rail cars, there is also activity at number 3 oil dock itself, which is being rebuilt, with all weather mooring capability.
Nord Swift is part of the huge DS Norden shipping company which owns or manages more than 250 dry cargo ships and 124 tankers from its headquarters in Hellerup, near Copenhagen. The tankers are operated by Norden and Interorient Navigation Co Ltd in the Norient Pool of 88 MidRange and 36 Handysize ships.
Built in 2015 by STX Offshore + Shipbuilding, in Jinhae, South Korea, the ship is a 30,229 gt, 49,579 dwt MidRange type. 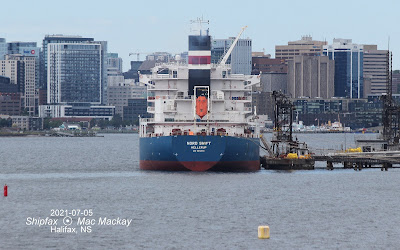 Although registered in Norden's home port of Hellerup, Nord Swift is enrolled in the Danish International Register, which allows companies based in Denmark to employ third country seafarers, and to pay Danish seafarers net wages without tax deductions. It is one means of promoting Danish maritime skills while remaining competitive internationally. (The country also has a tonnage tax and other measures to promote Danish ship owning.)
.