It was a subdued return to port for HMCS Halifax this morning, an unfortunate disappointment to families and well wishers after the ship's successful six month plus deployment to NATO. At almost the last minute families were informed that a crew member had tested positive for COVID-19 and the usual arrival festivities were cancelled. After these lengthy absences families are usually allowed admittance to HMC Dockyard to greet loved ones. 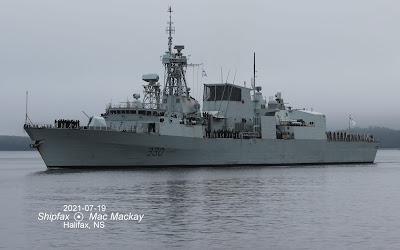 It was a suitably gloomy and muggy day for the ship's return, and only a portion of the ship's compliment appeared on deck compared to its New Year's Day departure when the rails were lined with crew. 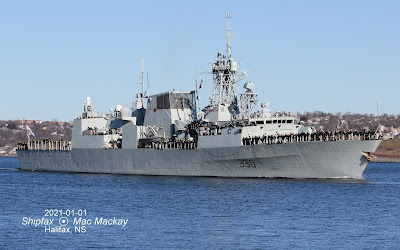 No details were made available regarding how the COVID-19 virus (or which variety) entered the ship, nor how a quarantine regime will be implemented. The ship did stop in Iceland for a courtesy visit on its way back from Europe. It also passed very close to land as it passed Newfoundland earlier this week.