This year marks the 100th anniversary of the launch of the original schooner Bluenose. To commemorate the event the controversial, and much rebuilt (but still beloved) replica Bluenose II will be touring Atlantic Canada. It will not be spending much time in Halifax, with today's visit to an anchorage off Bedford as its only Halifax call. Due to COVID restrictions imposed earlier in the year all sail tours were cancelled, although there will be "open deck" at some port calls. See the 2021 schedule here 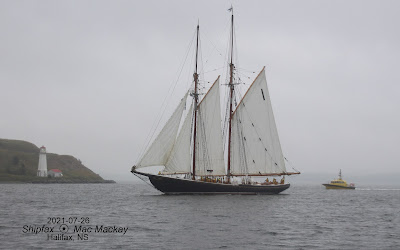 The Bluenose II's arrival in Halifax today was a foggy drizzly affair, but there were some spectators on the waterfront. The more interesting aspect, at least to me, was the flotilla of harbour craft on hand to greet the schooner. 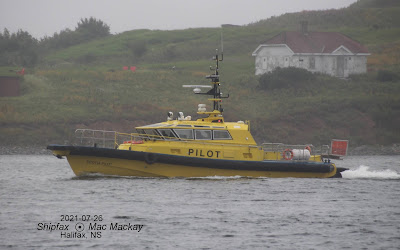 Scotia Pilot, inbound from an assignment joined the party. 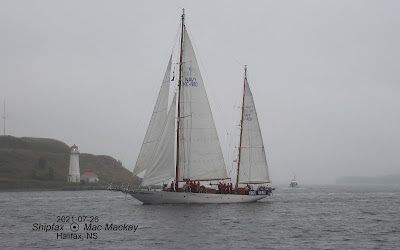 HMCS Oriole went out earlier in the morning to greet the arrival. 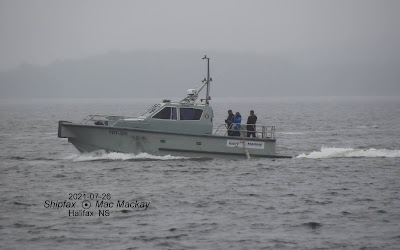 YDT 325 Defender is a Canadian navy "Cutter, Area Command" a 32 footer built by ABCO as a patrol and workboat, and works under the Fleet Diving Unit Atlantic. 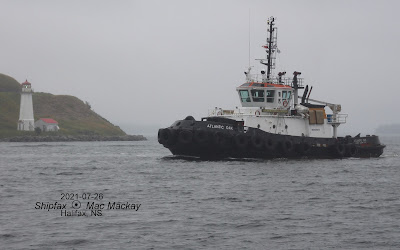 The harbour tug Atlantic Oak also went out to great Bluenose II and accompany it inbound. 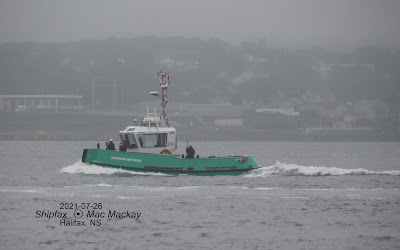 Dominion Enforcer is one of the two new tugs built in the Netherlands for Dominion Diving Ltd. 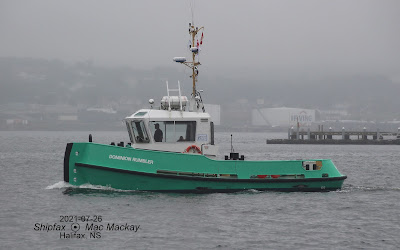 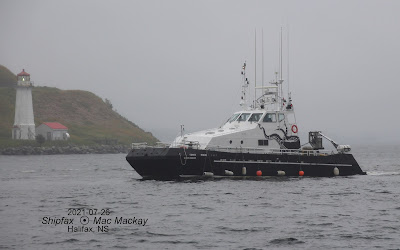 Ocean Seeker owned by Kraken Robotics, and based at the C.O.V.E. in Dartmouth has been conducting seabed mapping in the area in recent weeks. It is the former RCMP Murray. 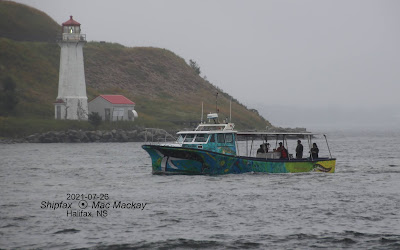 Alutasi is Canada's first hybrid diesel / battery - electric powered 12 plus passenger boat. The former Peggy's Cove Express has been retrofitted with lithium-ion batteries and now carries out some of its fishing tours using slow speed (and quiet) electric power. 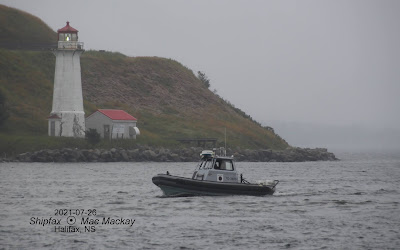 Carrying the identifier 1C-2870 this RHIB is operates as a private patrol boat by Sma'knis Maritime Safety + Security Inc, based at the C.O.V.E. in Dartmouth. 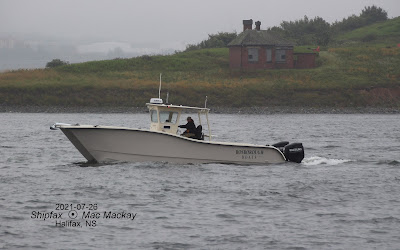 Local  builders Rosborough Boats turns out a wide variety of craft (such as the RHIB in previous photo). This twin hull centre console is a new type to me. Outboard motors, as they increase in power for small size,  are becoming more popular as a means of propulsion where inboard used to be the norm. 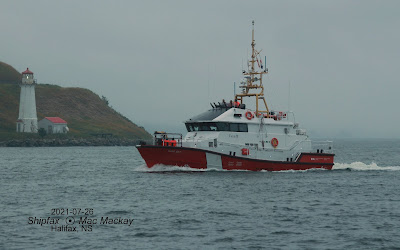 The Coast Guard lifeboat Hare Bay was part of the flotilla. Delivered by Chantier Naval Forillon in Gaspe in May, the boat is temporarily assigned to Sambro while the local boat is in refit. Hare Bay will be assigned to Bonavista Bay, Newfoundland and Labrador. 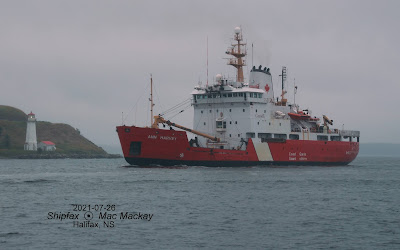 CCGS Ann Harvey returning from SAR East patrol brought an end to the escorts. On loan from the Newfoundland region while Halifax based boats are in refit or are reassigned, it has now been joined by the George R. Pearkes also from Newfoundland.
.
Posted by Mac at 2:22 PM