While Shipfax tends on focus on the commercial aspects of Halifax harbour traffic, there were two ships of significance in Halifax July 2, that were not essentially commercial in nature. 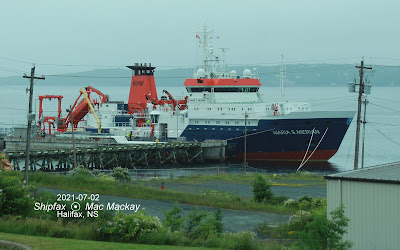 Financed by the German government and operated under the direction of the German Research Fleet Coordination Centre, Hamburg, by the well known commercial operators Briese Schiffahrts, the ship is used as a platform by many researcher organizations. It will be spending the summer off Canada, but periodically returning to Emden. It has bunker stops scheduled for St.John's August 1 and Halifax October 18.

Built by Maritim Shipyard in Gdansk, Poland and completed in Germany in 2006, the 5573 gt ship is one of three ships of its class.

Another non-commercial arrival today is CCGS Ann Harvey. Although based in St.John's, Newfoundland, the ship sometimes works in Nova Scotia for Search and Rescue patrols and  Navaids work when Nova Scotia ships go to Newfoundland. Such is the case as the Halifax based CCGS Earl Grey is working in the Northern Peninsula area of Newfoundland. 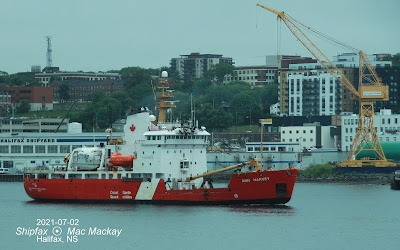 CCGS Ann Harvey passes its "birthplace" in bound to the Bedford Institute on a drizzly morning.
The ship was built at Halifax Shipyard in 1987, the last of the Martha L.Black class of light icebreaker. Following a serious grounding in 2015, the ship was extensively rebuilt as a Vessel Life Extension project by Newdock in St.John's. It has the classic profile with its cargo boom mounted and controlled from the superstructure.
.