With arrival of summer in northern Canada, the annual sealift is underway with ships, tugs and barges heading to arctic ports that are inaccessible for six to eight months of the year. The Canadian Coast Guard is also moving ships northward to assist.

Departing Halifax today, July 1, for Iqaluit was CCGS Jean Goodwill in its first season of northern operations for the CCG. (It completed ice trials in the Gulf of St.Lawrence earlier this year.) 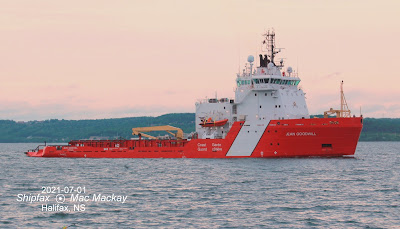 The former Balder Viking was built in 2000 as an icebreaking offshore tug/supplier. Acquired by the CCG with two sister vessels in 2018, it has completed most of the upgrades required to make it fully serviceable for the expected 15 to 25 years until new ships can be built. The 18,000 bhp vessel was built by Havyard Lervik, Norway and was refitted by Davie Shipbuilding. It arrived in Halifax November 27, 2020.

It is the second of the three ships to enter service following CCGS Captain Molly Kool ex Vidar Viking. The third ship is CCGS Vincent Massey ex Tor Viking II which will be handed over by Davie on completion of its full refit.

At first I did not recognize the significance of the July 1 departure date of the CCGS Jean Goodwill. July 1 is Canada Day, a national holiday, celebrating Canada's birthday, recognizing the confederation of several of Britain's North American colonies in 1867. This year however most Canada Day festivities, including fireworks were cancelled and the Canadian flag was flown at half mast including in Ottawa.

Instead Canada Day became for many a day of reflection and remembrance for the thousands of Aboriginal children who suffered and died in residential schools. Recent discoveries of hundreds of unmarked graves on the grounds of these schools are another reminder of the inhumane government policies that saw children forcibly removed from their homes and placed in government sponsored, church run, schools. There they were forcibly confined, deprived of their culture and language and often further abused  physically, mentally and sexually. Many died from disease, neglect or maltreatment and those that survived were often scared for life, and effected subsequent generations. That their deaths went unrecognized and burial sites unmarked merely adds to the shame that the nation as a whole bears for the racist policies.

Even after the "Indian Residential Schools Settlement Agreement" of 2007, and the recommendations of the Truth and Reconciliation Commission, Canada is only moving slowly to the right the many wrongs of its treatment of Aboriginal peoples.

For first nations people July 1 is not a day of celebration, as it marks the start of the residential school system, instituted by the first government of Canada.

CCGS Jean Goodwill is named for Jean Cuthand Goodwill, OC, recognized as one of the first Indigenous women to become a Registered Nurse in Canada (in 1954). Born in 1928, she died in 1997. Fortunately she was spared from attending residential school and went on to a significant career in public service. She was made an Officer, Order of Canada in 1991.