Ocean Network Express (ONE), the joint venture of the three Japanese container lines, (NYK, MOL and K-Line) is a member of THE Alliance and contributes ships to its various services. Most of the ONE ships still carry the names and colour schemes of the original parent companies. However it is the intention to rename the ships and repaint them with the unique magenta hull paint. The work is done as ships enter regularly scheduled refits and drydockings, so will take some time. When ONE was founded in 2017, the combined fleet consisted of 240 container ships with a capacity of 1.4 million TEU. With new (and larger) ships being delivered and older ships retired the rationalized fleet is now about  221 ships with a capacity of 1.6 million TEU. It is placed at sixth largest container fleet after Maersk, MSC, CMA CGM, COSCO, and HAPAG-Lloyd.

One ship that has been repainted for some time is ONE Houston arriving in Halifax today, July 9. 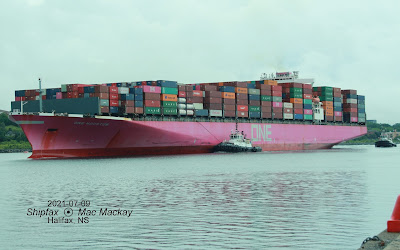 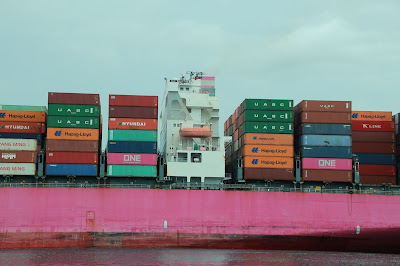 THE Alliance was formed IN 2017 by HAPAG-Lloyd (which is owned by United Arab Shipping Co, UASC), Yang Ming and ONE. It was later joined by HMM (formerly Hyundai Merchant Marine).