Even though Halifax is a relatively small port in some ways, it still has an interesting variety of shipping. Sometimes this is due to local industries, but it can also be simply as a result of our geographical position.

Today (July 10) was typical in that variety. Among the callers: 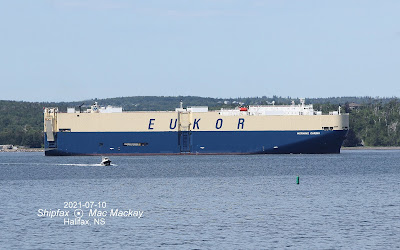 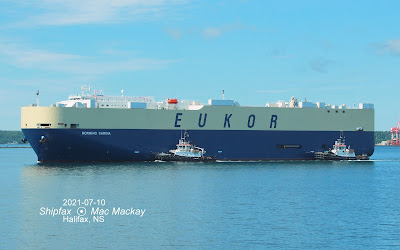 The ship is owned by the Japanese company Shoei Kisen, and operates nominally for EUKOR, but EUKOR is majority owned by Wallenius Wihelmsen, and the ship appears to be operating on WW's regular Transatlantic route, from Bremerhaven, Goteborg, Zeebrugge and Southampton.
Capesize bulk carriers, as the name implies, are too large to use the Suez or Panama canals when fully loaded, and so must sail via Cape Horn or the Cape of Good Hope if they wish to go from the Atlantic to Pacific Ocean. They are also generally rare callers in Halifax since their usual cargo is iron ore. 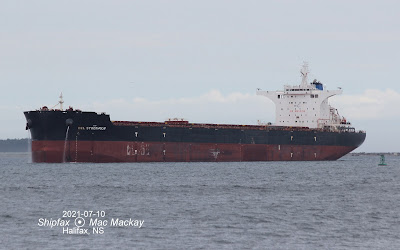 KSL Stockholm arrived in ballast from Gdansk, Poland today. It anchored for Asian Gypsy Moth inspection, but will be moving to Pier 27 for some maintenance. Built in Shanghai in 2015 by Waigaoqiao, it is a 94,528 gt, 181,043 dwt gearless bulker. Normally I would suspect the ship to be headed for Port Cartier or Sept Iles to load iron ore. Its sister ship KSL San Francisco is currently in Quebec City loading iron ore. The ship is part of the Golden Ocean Group Ltd, owned by the Norwegian-born tycoon John Frederiksen. He also owns Frontline, the world's largest tanker company, amongst other things.
A geared bulker is equipped with cranes, and sometimes grab buckets, to handle its cargo, however there is another sub-species of bulker - the self-unloader - which has built in conveyor belts and a swing out boom to unload its cargo. The cost of equipping a ship with this system is offset by the speed at which it can unload, and the precision of cargo placement when it does so. Algoma Integrity, a typical self-unloader, sailed this evening for Portsmouth, New Hampshire with a load of gypsum for Gold Bond's plant in Newington, NH. 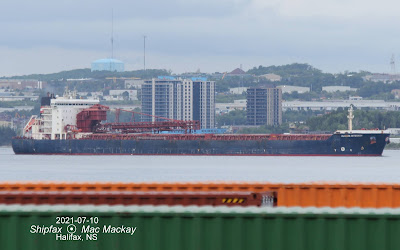 Built especially to carry gypsum, the ship can unload that material at a rate of 2,500 tonnes per hour. It can unload aggregates at 3,000 tonnes per hour. With a deadweight tonnage of 47,556 tonnes, it has a hold capacity of 45,708.5 cubic meters. Gross tonnage is 33,047. It was built as Gypsum Integrity in 2009 by EISA-Ilha in Rio de Janiero and originally sailed for competitor US Gypsum, but was sold to Algoma and renamed in 2015 after USG ceased its operations in Nova Scotia. It now operates in the CSL Americas pool and carries a variety of cargoes including coal, sand and aggregates.
Another carrier of cargo in bulk form is of course the tanker. The tanker type we see most frequently in Halifax is the product carrier (as opposed to a crude oil carrier) and usually of the MidRange type - the world's most common tanker. Today's arrival is therefore in no way remarkable. Dee4 Elm is a 26,900 gt, 47,401 dwt vessel, built in 2009 by Onomichi Zosen, in Japan.

Originally the Maersk Maya it became Rich Wind in 2018 and Dee4 Elm in 2020. A near sister vessel from the same shipyard, the Dee4 Dogwood was in port June 29 but for Imperial Oil. Dee4 Elm arrived from Saint John, NB, where it had delivered a part load. The only unusual thing about the ship is its odd name. It is managed by the Danish company Norden, but unlike it fleet mate it is registered in Singapore.
Tomorrow it is back to container ships, the real bread and butter of the port.
.
Posted by Mac at 10:32 PM