The big bulk carrier Castillo de Navia anchored in the harbour this afternoon July 25 for Asian Gypsy Moth inspection by the Canadian Food Inspection Agency. The ship's most recent port was Ingleside (Corpus Christi), TX but it has apparently been in Asia recently enough to be at risk of carrying the larvae.

Owned by the Spanish company Naviera Trans Iron SL, it is a bulk ore carrier, registered in Malta. At 66,687 gt, 119,612 dwt  it would be classed as a NeoPanamax size vessel. It was built in 2015 by Shanhaiguan SY in Qinhuangdo, China.

A close inspection of the photo revealed white structures forward of midships, which look like the pump house and derrick masts used by oil tankers to rig cargo hoses. The ship is not fitted to carry liquid cargoes, so these must be part of a hold ventilation system. Humidity control is critical to prevent liquefaction. This process causes some solid cargoes to behave like liquids, and results in the cargo shifting, imperiling the stability of the ship. Several bulk carrier losses have been blamed on liquefaction, and many ships are now built with hold ventilation. 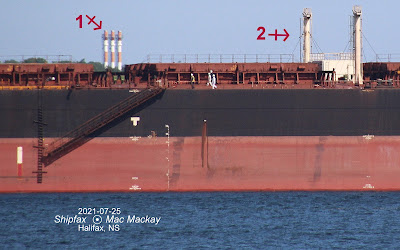 The vent stacks are on the right of the photo (#2 arrow).
The red and white stacks (#1 arrow) are on shore behind the ship and are part of Canadian Forces Base Shearwater's gas fired central heating plant.
Between the two arrows, on deck, near the head of the accommodation ladder there are two people in white coveralls, one in blue and another with a high visibility vest. I did not see them until I had enlarged the photo on the computer. They are likely the CFIA inspectors with a crew member escorting them around the ship.
The ship is scheduled to depart Number 1 anchorage at 1730 hrs ADT bound for Sept-Iles, QC to take on a cargo of iron ore.
.