There is a fine dividing line between the definitions of mist, drizzle and fog, but today's conditions were somewhere on that line. At times visibility was quite limited, and others merely restricted. The state of the visibility did not seem to effect the movement of the ship Hyundai Force from Pier 9C to Fairview Cove* this afternoon, April 1. 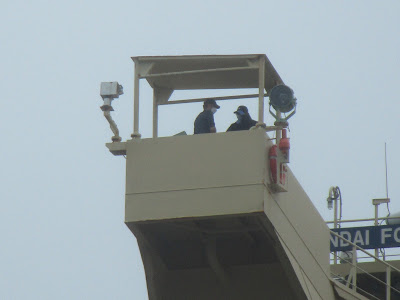 The pilot and a ship's officer had a little shelter from the drizzly mist on the ship's bridge wing as it prepared to move. Normally the awning is to provide shade from tropical sun - not the case today. 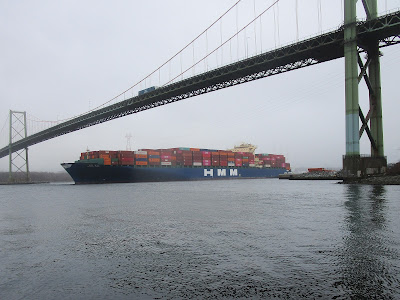 Hyundai Force passes under the A.Murray MacKay bridge as a truck with an Oceanex container crosses above. That truck must travel all the way through downtown Halifax to reach the PSA Halifax terminal, after passing by the Fairview Cove terminal.

The ship initially arrived in Halifax on Monday, March 28 and tied up at Pier 9C with a main engine problem. Whatever that problem was it seems to have been resolved, and now the ship has moved to Fairview Cove to work cargo. As previously noted, the ship is on THE Alliance's EC5 service and was not scheduled to call in Halifax. Perhaps with the delays due to a period "not under command"  earlier and the repair period this week, the operators decided to get the cargo moving to destination, rather waiting for the ship to reach Norfolk.

*  We learned in the news today that the takeover of the Fairview Cove container terminal by PSA has cleared government hurdles. The facility had been operated by Cerescorp, which was taken over by NYK Logistics some years ago. Opportunities for rationalization of cargo activity and major upgrades to equipment are clearly in the cards. Coupled with the expansion of the south end terminal, other changes are hoped for, particularly in the routing of truck traffic.

By the way the southend terminal - once known as Halterm, and more recently PSA Halifax - will now be known as the "Atlantic Hub" . Fairview Cove will not change its name, and both facilities will now operate under the title "PSA Halifax".

I don't know what marketing genius thought up "Atlantic Hub", but when I heard it first I was sure it was an April Fool joke.