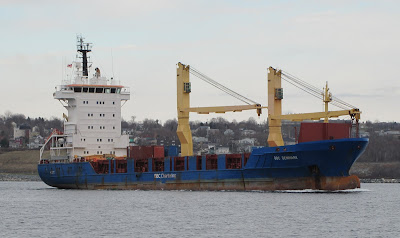 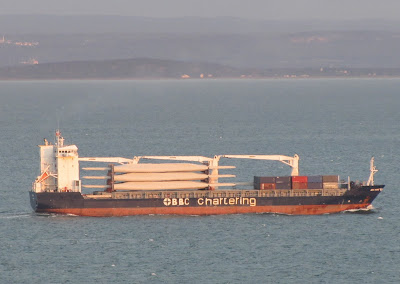 2. BBC Rhine upbound on the St.Lawrence River, off Cap-à-l'Aigle, QC, August 23, 2010.
October 10, 2020 was the day that the newly minted nation of Curaçao came into being. Formerly just one of five islands forming the nation of the Netherlands Antilles, its capital, Willemstad, was a port of registry for many European ships, particularly German and Dutch. They flew the flag of the Netherlands Antilles.
As of the auspicious date of the title the ships now fly the flag of Curaçao. On the same date the island of Sint Maarten also became an independent nation, but (at least so far) it has not become a flag state. The remaining three islands, Bonaire, St.Eustatius and Saba now have the status of Municipalities within the Netherlands itself.
BBC Denmark was in today for bunkers en route to Sweden and is registered in Willemstad. Hard as I tried I could not see if she was actually flying the flag of Curaçao but she is registered there.
Owned by Briese Schiffs of Germany, the she is a 4086 gross ton vessel, built in 1999 in Shanghai by Zhenghua Shipyard. She carries 390 TEU and has two deck cranes, each rated at 60 tonnes SWL. Her owners, known as BBC Charterting specialize in odd shaped and sized cargoes, and often carry windmill components.
The lower photo shows fleetmate BBC Rhine upbound on the St.Lawrence August 23, 2010, bound for Duluth with windmill blades. She reached there August 30 and after unloading, sailed September 9 and was outbound again from Montreal on September 13.
.
Posted by Mac at 9:07 PM