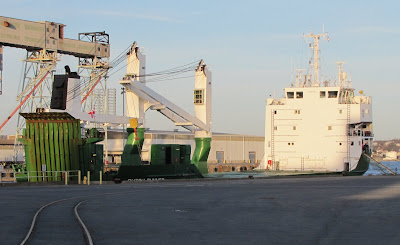 The container RoRo Dutch Runner put in to Halifax this afternoon, perhaps for the last time. The little ship was a familiar caller here from 2008 when she served as the weekly feeder to St-Pierre et Miquelon.
That contract was awarded to Fusion earlier this year and Dutch Runner has been "tramping" ever since. This summer she made northern supply trips on charter to Transport Desgagnés, and was laid up for a time in Montreal. This fall she went to Desoronto, ON and loaded, by barge, some large metal fabrications for Thunder Bay. In Thunder Bay she took a cargo to Owen Sound and loaded there for Quebec City. She stopped briefly in Cleveland, OH to promote a future container service from Montreal, and continued on her way to Quebec. She then went on to Pointe Noire, QC and loaded a cargo of aluminum ingots for Rotterdam.
She has arrived in Halifax to reflag to Barbados and change over to a foreign crew.
It is apparent that she will be trading, for the winter at least, in Europe, and may not return to Halifax.
Built in 1988 by the JJ Seitas shipyard in Hamburg, she can carry 219 TEU (or 221 TEU according to company specs) or 16 trailers and carries two cranes each rated at 35 tonnes.
.
Posted by Mac at 8:44 PM