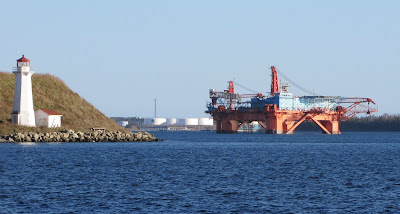 1. Chemul rests in number one anchorage on Sunday afternoon.

2. Atlantic Willow runs out an anchor (at left) while Atlantic Larch stands by as the Chemul conducts inclining tests on Saturday.

The construction and accommodation rig Chemul moved out to anchor on Saturday for inclining tests. These tests, used to confirm the rig's stability, are among the last steps to be taken before a project is completed. Therefore the project to repair and rebuild the rig must be nearing an end.
The work has been a major project for Halifax Shipyard, and has employed a large work force at the Woodside dock since the rig arrived in 2008. At the time the contract was estimated to exceed $110 mn.
Chemul was undergoing repairs and refit at Mobile AB when it was damaged during Hurricane Katrina in 2005. The rig, which was secured on a barge when the storm hit, was swept up the Mobile River and wedged under a bridge. Considerable damage was done to rig, barge and bridge. Some of the hull work (that is below the main deck level) had been done by the yard in Mobile, but it was Halifax Shipyard that was hired to complete rebuilding of the accommodation block and install cranes and other construction equipment on the rig.
The unit is not a drilling rig, but is used to support construction activity offshore and to house a large work force. It is built along the lines of a conventional semi-submersible oil rig, but it does not do drilling.
Chemul is owned by Pemex, the Mexican state oil company and is expected to return to Mexico on completion of the work.