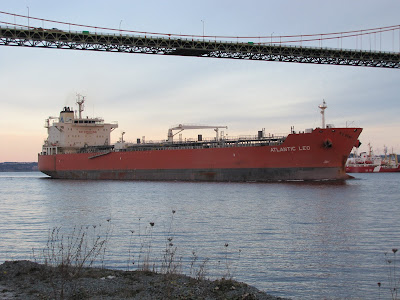 2. Atlantic Leo moves into the Narrows this morning on her way back to Imperial Oil. She had been at anchor there since Thursday afternoon.

3 Algonova heads for anchor while Algoscotia waits for Atlantic Leo to clear her berth at Imperial Oil and head for anchor in Bedford Basin, on Thursday, November 18.

Halifax has seen a terrific tanker jam in the past few days. In addition to the usual coastal tankers, Algoscotia and Algonova, that have been jockeying for berths, there have been no fewer than four product/chemical tankers and a couple of crude oil tankers as well.
Most of the tankers have had to wait for berths to become free, have moved alongside then moved off to anchor again, then they have come back to the same or another berth to complete their work.
This has provided lots of work for tugs, and kept harbour pilots busy too.
Atlantic Leo (Hong Kong register, Singapore managed) was built in 2008 and is 29,266 gross ton chemical/product tanker.
Cielo di Parigi flies the Liberian flag, and is managed by the Italian operators d'Amico Sta.deNav. of Rome, but is owned by d'Amico Tankers Ltd of Dublin, Ireland. Built in 2001, she measures 23,680 gross tons. Her name translates as Paris Sky.
Posted by Mac at 8:15 PM