A stiff northeast wind had ships straining at their anchor cables this morning. Fortunately the wind has blown the rain and fog out to sea, and it is possible to see clearly (and take pictures.) 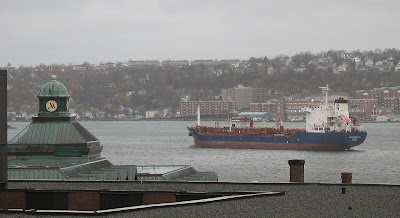 1.Nordic Copenhagen looks fairly serene from this vantage point. The Danish owned tanker was built in 2005 and is a chemical tanker with epoxy coated tanks. (Some chemical tankers have stainless steel tanks and others have proprietary coated tank surfaces, for carrying various types of liquids.) The ship was built as Sichem Copenhagen and was acquired by Nordic in 2007. Nordic currently owns or manages close to seventy tankers of various sizes, and organized into operating pools. 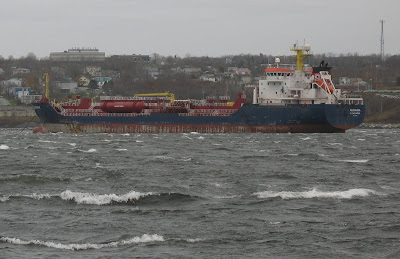 2. Algonova, was built in 2008 in Turkey and is a products tanker, carrying various petroleum fuels. It is one of two Canadian tankers (Algocanada is the other) for which the government has granted retroactive duty relief. The large tanks on deck are for carrying tank residues (slops) that are removed from tanks during cleaning. The slops are stored in these tanks and pumped ashore for recycling.
By the time this picture was taken the tide had turned and there was quite chop in the harbour. Wind was nor'easterly at 31 knots with gusts to 38.9 knots.
.
Posted by Mac at 1:46 PM