Acadia cocooning for the winter 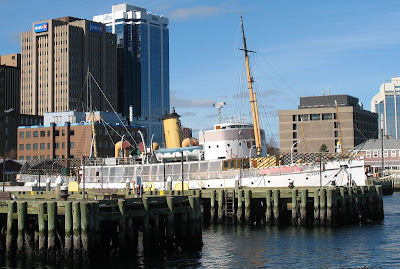 CSS Acadia the former survey ship and pride of the Maritime Museum of the Atlantic is preparing for winter. Every year the ship receives a partial cocoon, which protects the wooden decks and contains heat to allow for winter work.
The 1913 era former survey ship is the only existing vessel to have served the Canadian navy in both World War I and World War II. It has many more distinctions, which you can read about here:
http://museum.gov.ns.ca/mma/atoz/acadia.html
Posted by Mac at 1:22 PM