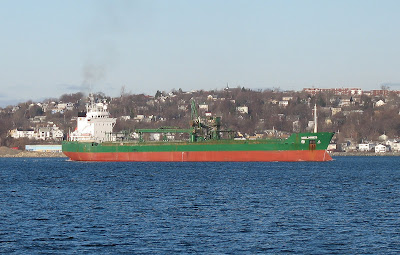 The small self-unloading bulk carrier Malmnes is a regular caller in Halifax for bunkers. The ship often loads stone at Auld's Cove on the Strait of Canso and calls in Halifax to top up her fuel tanks before loading. The ship usually heads south, often to the Caribbean, to discharge her cargo. She has a small slewing boom conveyor mounted amidships, which allows her to place the stone precisely where needed.
Stone is a rare commodity on some of the sandy islands and is used as a base underlay for the construction of foundations, roads, airports and port facilities.
Malmnes is registered under the Norwegian International Register, but is owned by Erik Thun AB of Sweden. It was built in 1993 and measures 5883 gross tons, 9891 tonnes deadweight.
.
Posted by Mac at 2:55 PM