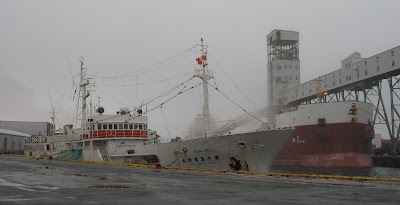 Japanese tuna longliners were once common in Halifax, with scores of boats coming in for fuel and stores, during the winter season. In recent years the tuna stocks have declined (no coincidence) and the boats have been using St.John's NF and St-Pierre more than Halifax.
Yesterday Toei Maru No.15 tied up at pier 24 and fueled from trucks. It will be sailing later today. By regulation these boats display their radio call signs(JCSI in this case) so that they can be seen by surveillance aircraft. They also have a port number (this one is KNI-696) displayed in smaller letters near the bridge.
These boats travel widely from the Mediterranean, the Azores, the western North Atlantic to South America and South Africa. They deep freeze their catch and land periodically to transfer the catch to containers, which are sent back to Japan for processing.

In the background Atlantic Erie is raising some dust while unloading a grain cargo from the Great Lakes.
Posted by Mac at 8:53 AM