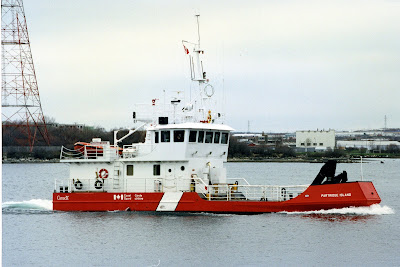 In 1985 and 1986 the Canadian Coast Guard took delivery of four Type F or 800 class Navigation Aids tenders. These miniature buoy vessels, besides being endearingly cute (they were designed by Robert Allan Ltd of Vancouver) were very useful vessels. They were miniature self-contained units and could go places that large ships could not. At 23 meters loa x 6m breadth, they drew only 1.35m (design draft) on a hull depth to main deck of 2.25m. The accommodation was raised a bit above the main deck to provide more headroom in the engine space that contained two Detroit V6-92 main engines delivering 636 bhp to two controllable pitch propellors. There was also a wide wheelhouse with chart table and a HIAB deck crane for handling small buoys and other equipment. There were two double cabins and one single and a full galley and mess in the deck house. What looked like a funnel was actually the base for a fire fighting platform. (Engine exhaust was through the transom, below the waterline.)
All four were built at the Breton Industrial & Marine yard in Point Tupper, NS and were named and assigned as follows:

They covered large areas, particularly Partridge Island, which ranged all over the Maritimes and Ile des Barques, which served into the Gulf of St.Lawrence and Magdalen Islands. When the Coast Guard cut back on its services in small ports and navigable rivers, these craft were pushed out of their normal territories and of course were found to be unsuitable for deep sea work!
Partridge Island was decommissioned in July 2003 and laid up in Arichat, NS. Eventually she was hauled out there and renamed 2005-07. On December 1, 2009 she was sold to McNally Construction, but as yet there has been no word on what they plan to do with her. The published sale price was $56,017.00. [Ironically, McNally occupies the site of her orignal builder's yard, long since defunct, at Point Tupper.]
Ile des Barques was also hauled out at Arichat and renamed 2008-02. She was also sold, and her registry closed January 14, 2009, on her transfer to French registry. She was purchased by the government of St-Pierre et Miquelon, but I have found no trace of her since then.
The other two, which have spent their entire lives in fresh water, are still operating in more or less the regions they were built for and are still performing useful work for the CCG.