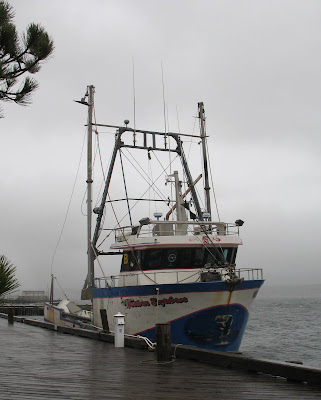 As a major wind and rain storm moves through Halifax today and tomorrow, harbour activity has ground to a halt. No ships arriving or departing except Oceanex Sanderling. The St-Pierre et Miquelon feeder Fusion opted to go to anchor in the Basin rather than sailing last night.
Dredging operations at Halterm have been adjourned, and the dredge Canadian Argosy has gone to pier 9, with the tugs and scows tucking into pier 24-at least for now. Depending on the wave slop they may decide to move later.
Another arrival yesterday was the fishing vessel Western Explorer. She put in to the Tall Ships Quay yesterday, ahead of the storm, but it was too rough there this morning so she moved to pier 9C. The above photo was taken just before she moved, and doesn`t begin to show how she was bouncing around. The boat is something of a mystery. Her Canadian registration was closed October 20, 2007. It appears to have a New Jersey registration on the side of the bridge. My assumption therefore is that she has been bought back by Canadian owners, probably in Newfoundland, and is on her delivery trip.
Posted by Mac at 10:41 AM