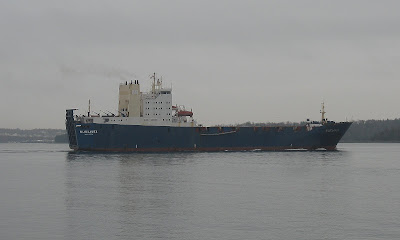 The Polish owned and Maltese flagged Wloclawek sailed today after several days tied up at Jetty November Alpha (Shearwater). The ship has been on long term charter to the Canadian military since October 2007 and has carried out several useful "missions" during that time.
Built in 1989, in Poland, the 15,635 gross ton RoRo vessel can carry 505 TEU and has 1366 lane meters of RoRo capacity, over a 200 tonne stern ramp.
When the Canadian military found that it would be without its usual supply ship while Preserver was in refit they chartered this ship to transport military gear to and from Afghanistan (or at least to a nearby port.) Operated by CANOSCOM (Canadian Operational Support Command) it reportedly can, in a single voyage, carry the equivalent of 400 flights of Hercules aircraft. Transporting tanks, and wheeled vehicles and all sorts of other equipment, it also was pressed into service following the Haitian earthquake. It delivered relief supplies to the Dominican Republic, for transshipment to destinations without port infrastructure.
Although the ship has spent a lot of time sitting in Montreal and Halifax it has also participated in some NATO exercises.
Posted by Mac at 9:07 PM