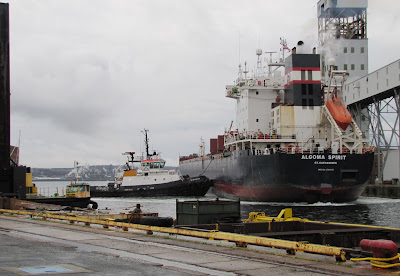 The bulker Algoma Spirit sailed yesterday morning, giving Port Cartier as its destination. But by mid-afternoon the ship was back alongside - just as if it never left. No doubt some glitch came to light and the ship came back for repairs. [file photo from October 31]
As I stated in a previous post (for which some generous, but anonymous soul, volunteered that I didn't know what I was talking about) this ship and its two sisters may not be in the Algoma fleet for the long haul.
My reasoning in this is as follows:
1. The ships were built in 1987. This puts them in the last days of their useful lives. Ships such as these rarely last 30 years, so a 23 year old ship is not a long term investment.
2. The price paid for the ships was close to scrap price. This might encourage the owners to spend money on them to keep them going, but it would likely involve a major investment in new forebodies to justify keeping them for the long haul. Putting a new forebody on an aged saltwater hull probably does not make sense.
3. The ships have spent the first 23 years of their lives in salt water, so a few years more in fresh water will not radically extend their lives.
4. Algoma has announced a building program - but it is a modest one and it will be necessary to replace some of its self-unloaders too. So give them 5 to 10 years to get this program underway, and a subsequent one, and the Algoma Discovery, Guardian and Spirit will be 28 to 32 years old - surely the outside limit for the ships unless they are seriously upgraded. If they go to seasonal operation, they wil come under relaxed rules, which may buy them another 5 years.
5. The ships recently sent to the scrappers were 40, 43 and 35 years old (since rebuild) , but all spent those years in fresh water trades. Therefore I am suggesting that these recent acquisitions will have at most a 10 to 15 year life with Algoma - surely not a long time, but in view of the bargain basement price, they will be fully amortized and can be written off.
6. Algoma could sell these ships for scrap to India today for more than they paid for them. However they need the ships right now. However these ships can sail to India on their own and do not have to be towed to Turkey for a discounted $100 /LDT that Turkish scrappers are now paying for ships below the India and China prices, which are up in the $350 to $450/LDT range.
If in a few years when new ships are coming on line, someone will do a cost benefit analysis and my prediction is that these ships will go, and it will be in the 7 to 12 year range. That is my prediction - see you then!
.
Posted by Mac at 7:19 PM