Parade to the Scrapyards 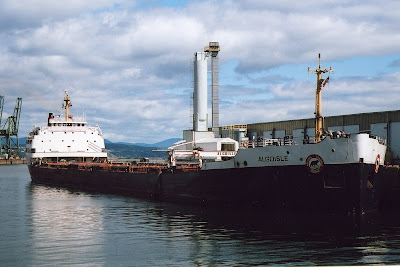 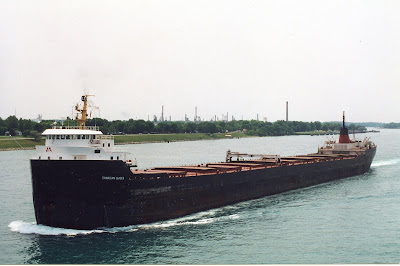 2. Canadian Leader downbound in the St.Clair River June 22, 2002, taken from Pineglen, and showing off her classic laker look.

3. Canadian Prospector upbound at Light 45 after exiting Eisenhower Lock, August 24, 1993. Her stern rake is a sure sign of her ocean going ancestry, but her forebody is pure Lakes.

Several older Canadian ships have been consigned to the scrappers this year. Some report that it is due to favourable scrap metal prices, and others attribute it to the tariff rebate. In any event there have been four large ships sold this year and perhaps more to come. There are at least three or four laid up and ready to go.
In alphabetical order the ships have been:
Agawa Canyon. This self-unloading bulk carrier, confined to the Great Lakes/ St.Lawrence Seaway never visited Halifax in its thirty-nine year career with Algoma Central. Built in 1970 in Collingwood, it was laid up in Montreal late in 2009. It departed Montreal again September 18, 2010, but this time in tow of the tug Sirocco and arriving in Aliaga Turkey October 17 to be broken up.
Algoisle. Built as Silver Isle in 1963 by Verolme United Shipyard in Cork, Eire, the bulk carrier was unique in its time as the first laker with wheelhouse aft. Also it was built overseas. In its career with Mohawk Navigation, Pioneer, Great Lakes Bulk Carriers, and since 1994 with Algoma Central, as Algoisle, it never called in Halifax. At the end of the 2009 season it laid up in Montreal until October 5, 2010. It then sailed in tow of the tug Ionian Pelagos, and is due in Aliaga Turkey any day now for scrapping.
Canadian Leader. Built in Collingwood in 1967 as the steam turbine powered Feux Follets
for Papachristidis Co Ltd, it was sold to Upper Lakes in 1972 and renamed Canadian Leader. One of the last steamers running on the lakes (and the Great Lakes steamer built in Canada), it was a classic, with wheelhouse forward. Laid up in 2009, it was towed out of Hamilton, ON today by the tugs Jarrett M., Seahound and Lac Manitoba bound for Port Maitland, ON where it will be cut up. [Later correction, the tow stopped in Port Colborne - as to where the ship will be broken up, that remains to be seen.]
Canadian Prospector was a slightly different ship, built in 1964 by Short Bros. of Sunderland, UK as Carlton for Chapman & Willan. A typical ocean going bulk carrier of 13,954 gross/ 20,500 deadweight tons it was built 74 feet wide so as to transit the Seaway. In 1969 it was lengthened 80 feet in Rotterdam, increasing tonnages to 16,303 gross, 26,400 deadweight (19,700 at Seaway draft.) In 1975 its was renamed Federal Wear for a charter to Fedcom (now Fednav.) However the name did not last long for Upper Lakes purchased the ship the same year and it was renamed St.Lawrence Prospector.
It did call in Halifax from time to time with grain, but early in 1977 it was towed in by Janie B with rudder damage, caused by ice.
In December 1978 it arrived in Halifax to unload grain en route to Saint John where an entirely new forebody had been built, to maximize its Seaway carrying capacity. This gave her 18,526 gross/ 28,450 deadweight (26,420 at Seaway draft.) However from that time the ship was restricted to the Lakes and Gulf, and no longer called in Halifax. Upper Lakes gave her the name Canadian Prospector at the time. This lengthening from 642 to 730 feet overall extended her life span effectively until the end of 2009. At that time the ship was laid up in Montreal. On October 1 the tug Simoon towed the ship out and arrived in Aliaga, Turkey November 3.
These ships were all very old by world standards, and even by Canadian standards, despite having spent so much time in fresh water. The ships being brought in to replace them, such as the Algoma trio previously noted, are stop gaps only until new ships are built overseas, and will probably not reach the advanced age that these ones did.
.
Posted by Mac at 7:54 PM