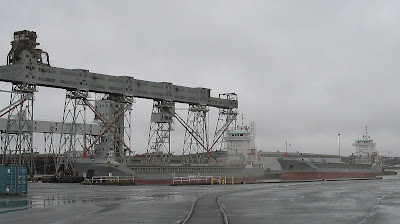 Flinter Shipping BV of the Netherlands operates a large fleet of vessels, many of them in the forestry trades, carrying paper pulp, paper components such as china clay, and other commodities that are temperature and humidity sensitive. They are frequent callers in Canada, and into the Great Lakes for Canadian and US ports. The ships have large holds and open decks and so are also suitable for a variety of oversize cargoes such as windmill blades. See www.flinter.nl for more on the fleet.
It is not often however that you see two ships of the same fleet tied up together.
Today Flintermaas is loading wood pellets while sister Flinterduin waits patiently for its turn. Both ship are 4503 gross tons, and Flintermaas was built in 1999, whereas Flinterduin was built in 2000.
Bad weather delayed loading of Flintermaas and as a result Flinterduin will have to wait until conditions are suitable to complete loading the pellets. The pellets are stored in the Halifax Grain elevator, and are loaded in bulk, just as grain would be. They are also moisture sensitive, so are only loaded when the rain lets up.
Posted by Mac at 3:25 PM