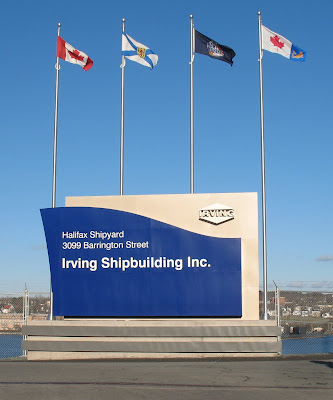 
Although there is nothing to see yet, Halifax Shipyard is at work building the nine new midshore patrol vessels for the Canadian Coast Guard.
On November 10 the Minister of National Defence, on behalf of the Minister of Fisheries and Oceans, announced the names of the first two vessels in the class.
The ships will be named after "heroic Canadians who put duty ahead of their safety in service to our country."
The first two will be called Caporal Joseph Kaeble, V.C. and Private James Peter Robertson, V.C.
Corporal (Caporal in French) Kaeble was a native of St-Moise, QC and Private Robertson of Pictou County, NS. Both lost their lives in the First World War, and were awarded the Victoria Cross (the highest military award) for their deeds.
A press release from the Government of Canada tells more about the men and their heroic actions. http://www.marketwire.com/press-release/Government-of-Canada-Dedicates-New-Coast-Guard-Vessels-in-Remembrance-of-War-Heroes-1351019.htm
The new ships will be 43m in length, a speed of 25 knots, a range of 2000 nautical miles. They will be built to a Damen 4207 design, used by such countries as the Netherlands, UK, Jamaica, Barbados and Albania. They will be used by a joint CCG/RCMP marine security force to patrol the Great-Lakes/ St.Lawrence and east coast.
Posted by Mac at 11:22 AM