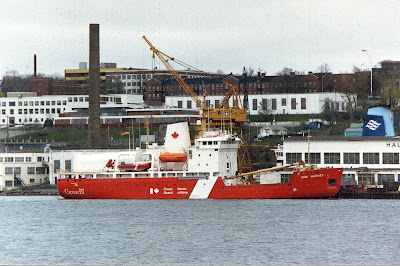 1. Ann Harvey alongside Halifax Shipyard, May 16, 1987, just before delivery. That is the late lamented PEI ferry Abegweit in the graving dock. 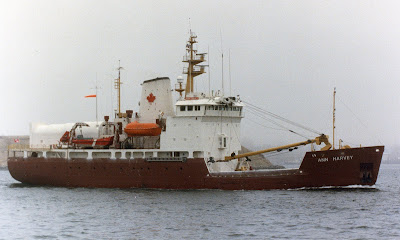 The Canadian Coast Guard Ship Ann Harvey returned to the port where she was built today for a brief stopover for bunkers. The ship is on her way to standby during the opening of the southwest lobster season, and was called in because CCGS Earl Grey is in maintenance and not available. The opening of the lobster season is a very active time on the water, when hundreds of boats set out to place their traps, and several usually get in trouble because they are overloaded. This year the weather is favourable, but fishermen need to get their traps in the water on the first day to claim their spots and also to benefit from the pre-Christmas demand for the crustaceans.
After fueling the ship made a brief stop at BIO, probably to embark fisheries officers, and departed immediately for sea.

Ann Harvey was built at the Halifax Shipyard when it was owned by Halifax-Dartmouth Industries Ltd, and was the only ship built at the yard under that ownership. The ship was launched December 12, 1985, and completed in the spring of 1987. She is a type 1100 light icebreaker/ buoy tender, of the same class as Sir William Alexander and Edward Cornwallis, but has an extra accommodation deck beneath the bridge.
Based in St.John's NL, she is a very rare caller in Halifax, although she has returned for drydocking on at least one occasion.
.
Posted by Mac at 9:55 PM