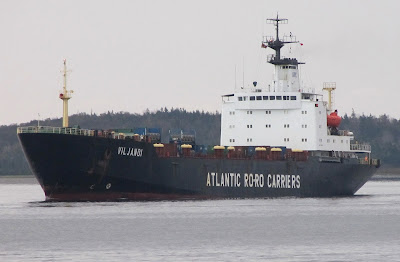 2. Viljandi on September 27, her second to last visit.

Atlantic RoRo Carriers has been making more regular calls here this fall, probably for reefer cargo - it is the height of the fish and produce season.

As posted on September 27, the line runs from St.Petersburg, Russia to Baltimore and New Orleans, and will call in Halifax "on inducement" - i.e. if there is cargo for or from here.

Today's caller is more typical of the multi-purpose ships on the ARRC service. Atlantic Action is an Astrakhan Mark III type Lo/Ro ship built in 1993 at the Kvaerner Warnow Werft yard at Warnemunde (then East) Germany. It is a vessel of 16,075 gross tons with a stern ramp and significant RoRo capability, and can carry 729 TEU (30 reefer) and has five cranes at 12 tonnes each, four of which can be combined for heavy lifts. The ship can also carry general cargo and bulk cargoes.

Built as Victor Konchayev it was renamed in 1996: Gemini Star, 97: Bremer Carrier, 98: Nordana Kisumi, 99: Seaboard Chile, 01: Atlantic Cavalier and took its present name in 2003. It is currently owned in the Ukraine and flies the flag of Cyprus.

Tuesday November 9 was too miserable a day to photograph fleet mate Viljandi, so a September 27 photo will have to do for now as the last photos taken in Halifax of this ship. Following its call in Baltimore a few days later, the ship was on its way to the scrap yards in India. The ship was sold in October and fetched $470/LDT, quite a high price, realizing some $2.8 mn for her owners. (See September 27 posting for more on this ship)