The lead ship in the Royal Navy's new type 45 destroyers is HMS Daring. The ship arrived this afternoon and was met by three tugs to assist in berthing at HMC Dockyard. 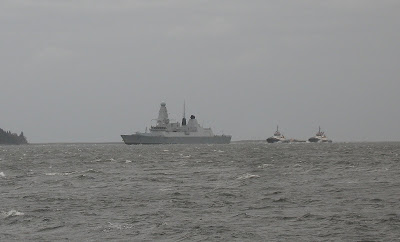 1. Tugs Atlantic Larch and Oak play catch up as the ship slides in to Halifax Harbour.

2. With tugs alnside, the ships lines are somewhat obscured, but the clean, "stealth" appearance is apparent. A third tug, Atlantic Willow, will also assist in berthing due to a very stiff breeze.
The ship was launched in 2006 and commissioned July 23, 2009. After many trials and workups the ship actually entered service July 31, 2010.

In common with most new warships the vessel shows a very small radar profile, because of reduced clutter on deck and masts and an absence of vertical plates.
Posted by Mac at 3:10 PM