The pure car and truck carrier (PCTC) Asian King took an escort tug on the way in this afternoon. This is the second time in as many days that an escort tug has been used for a non-typical ship. Perhaps in this case it was for pilot training or due to high wind. See update below.  In any event, once inside Meagher's Beach the Atlantic Oak cast off the stern line and joined Atlantic Willow alongside for a normal berthing position.

2. In the Middle Ground area, Atlantic Oak comes out from astern and catches up to its normal position for berthing.

Asian King is a member of the 46 strong EUKOR fleet of car carriers, based in South Korea.
Established in 2002 by Hyundai Merchant Marine, EUKOR (EUrope KORea) ships transport Hyundai/Kia vehicles from Korea, Turkey and India to Europe, but also transpacific to the US, and up the east coast, also around Africa. Long associated with the Wilhelmsen organization (the ship is actually managed by Wilhelmsen's Korean ship management arm.) It also carries other brands of vehicles in a sharing arrangement with Wallenius-Wilhelmsen, such as this trip, operating on a regular Wallenius-Wilhlemsen route from  Bremerhaven, Gothenburg, Zeebrugge, Southampton, Halifax and on to the US east coast, carrying north European cars.

3. Finally a little sun on the subject.

Built by Hyundai Heavy Industries in Ulsan in 1998 the ship is rated for 6,628 CEUs on 55,729 gross tons. It has four hoistable decks, allowing it to carry cars and oversized vehicles. 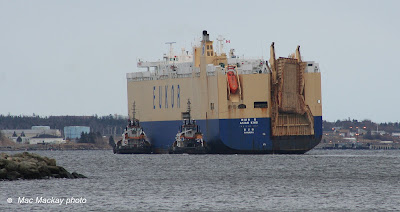 4. The large stern ramp allows for two way traffic and heavy loads. The free fall lifeboat is tucked away above the ship's name (in Korean and English.) The ship flies the flag of Panama. Tugs are helping the ship to make the turn around Ives Knoll to Autoport in Eastern Passage.


Update:
Transport Canada, Ship Safety required the ship to take an escort tug, because it was missing its port anchor. The ship lost the anchor and eight shots of chain in Germany.  A shot is 90 feet (or 15 fathoms if you prefer) That is a lot of chain! Ships are required to have working anchors (2 of) in case of engine failure or other emergency. 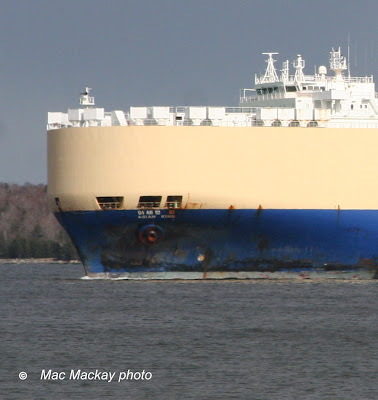 5. Hawse pipe, without anchor - a rare sight. Lots of surficial scraping in the area too.
Posted by Mac at 5:53 PM