IT Intrepid - off to Deep Panuke

1. IT Intrepid sails for Deep Panuke this afternoon.

The cable ship IT Intrepid sailed this afternoon for the Deep Panuke gas field off Sable Island. The project, which has experienced numerous delays and is not yet in production. IT Intrepid's work involves, not cables, but removing tunnels and installing scour protection.
The ship, which is operated from Halifax by IT International Telecom, flies the flag of Barbados, and required a coasting license to do the work.

The ship was built in 1989 by Swan Hunter in Wallsend for Cable and Wireless Ltd, the British company, as Sir Eric Sharp. When built, she was all white, with buff funnel and mast, giving a smart yacht-like appearance.


3. The A-frame was built around the stern sheaves.

The ship has bow and stern sheaves. Since acquired by IT the stern was heavily modified to accommodate an A-frame and other gear associated with trenching and burying of cables.  Cable ships have usually had very fine lines, going back to the aforementioned Lord Kelvin mentioned last week. http://shipfax.blogspot.ca/2013/04/it-intrepid-more-work.html 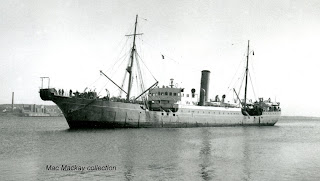 4. Lord Kelvin arriving at the Cable Wharf in the 1950s. What is now the IEL wharf is in the background, it was then the Acadia Sugar refinery.