Barkald and Sea Pearl - a line up at National Gypsum


Things must be picking up south of the border. It has been a while since ships have had to wait their turn at National Gyspum. 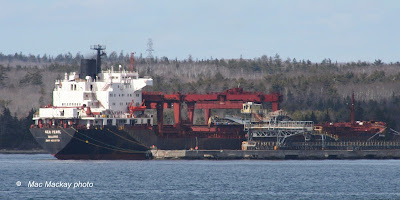 Arriving last night Sea Pearl was first in to load. A sister of the White Pearl that was in a while ago, http://shipfax.blogspot.ca/2013/02/white-pearl-open-hatch-cargo-type.html , is an open hatch ship, usually found in the forest products trade, but pressed into service as a bulk carrier for the relatively benign gypsum ore. Built in 1986 in Poland, as Rio Purus, it carried the name Alanya from 1993 to 2007. At 27,013 gross tons and 38,760 deadweight tonnes, it carries a 25 tonne crane in each of its traveling gantries. The gantries have to be shifted about when the ship is loading at National Gypsum as the conveyor system there moves a long the dock. This is the first time the ship has called here as far as I can recall.

Barkald is a more frequent caller, and has been seen here off and on since it was built in 2002 (by Oshima in Japan). It is owned by Torvald Klavenes of Norway, but registered in the Marshall Islands. It is a similar ship to the Balder that called last week http://shipfax.blogspot.ca/2013/04/balder-revolutionary-in-more-ways-than.html and http://shipfax.blogspot.ca/2013/04/more-balder.html. However it has an earlier generation of unloading system. It uses its four 30 tonne cranes to feed a deck mounted conveyor system and boom. Each crane is equipped with two buckets (for different types of cargo) and there is a hopper adjacent to each crane, feeding the conveyor system. The system runs around the stern of the ship and up to the boom, which swings out over the dock to unload.

Part of the CSL International pool, it is also a regular in the Strait of Canso in the coal and aggregates trades. It comes in at 28,924 gross tons and 49,463 deadweight.
Posted by Mac at 6:08 PM