The passenger cargo ship Bella Desgagnés arrived in Halifax this morning after an arduous delivery trip from Europe.Originally planned for 2010 delivery, the building of the ship has been a lengthy and costly one for Relais-Nordik, the subsidiary of Groupe Desgagnés, that will operate the ship.

The ship was specially conceived to service a unique niche in Canadian transportation, linking a dozen remote communities on the lower north shore of the Gulf of St.Lawrence. Naval architects Deltamarin were challenged to include a number of features, perhaps unique to one ship. It had to accommodate large number of deck passengers, provide some small cabins and some luxury ones, and all the catering and other services required for a passenger ship. It also had to carry significant amounts of cargo in containers (some refrigerated), and its own crane to load and unload the boxes rapidly. It also was restricted in length and draft due to the small size of its ports of call. In addition to all of this it had to be high ice class to serve the route year round.
On completion of the design in 2008, construction was awarded to the Kraljevica shipyard in Rijeka, Croatia. Although launched May 10, 2010, the construction process was fraught with delays, culminating in the financial collapse of the yard last year, before the ship was completed. After legal maneuvers, Desgagnés took possession of the ship and moved it to the Fincantieri shipyard in Italy for an assessment. Reports indicate that the ship was 92% complete (others say 60%) - the former figure seems more likely. The Palumbo shipyard in Naples was selected to complete the work, and the ship was able to sail from the shipyard on March 22.

2. The ship has a variety of accommodation in four classes.

Bella Desgagnés encountered severe weather en route, including near hurricane conditions. It put in to Las Palmas in the Azores for seven hours to refuel and made its way on toward Halifax.
At 95 meters length, 19.35m breadth and only 4.42 meters draft, the ship can still accommodate 381 passengers-many of which would be deck passengers. It has 63 cabins (some de luxe), dining room, cafeteria, lecture room and other passenger amenities.  It can also carry 125 TEU of containers and has its own 30 tonne, long reach crane to work them on and off. It is built to Ice Class IA and can reach a speed of 15 knots. Its propulsion system consists of four diesel engines, driving two electric motors and two azimuthing stern drives. It also has two bow thrusters and as a result it has maneuverability comparable to a harbour tug.

3. A large clear after deck for containers is served by a long reach crane.

After clearing Customs in Halifax, refueling and taking some stores, it will sail later this afternoon for its new home territory. After introductory visits it will proceed to Sept-Iles for official christening, then to Rimouski for documentation and commissioning before entering service at the end of April
The ship will replace Nordik Express, built in 1974 as an offshore supply ship, and converted at Dartmouth in 1987. It is rated for 200 passengers deck, 60 berthed, and 56 TEU. Long past its replacement date, it will soldier on this year, running in tandem with Bella, but will be retired in the fall.
The ship's normal weekly itinerary runs from Rimouski to Sept-Iles, Port Menier, Havre-St-Pierre, Natashquan, Kegaska, La Romaine, Harrington, Tête-à-la Baleine, La Tabatière and St-Augustin, where is there is a connection through Blanc Sablon to the ferry to St.Barbe, Newfoundland.

4. An impressive full width bridge, with enclosed wings for winter work, dominates the superstructure forward.
Update:
Bella Desgagnés sailed from Halifax at 1800 hrs this evening, giving its destination as Blanc Sablon, with an  ETA of 1900 hrs April. 11. While in Halifax the ship refueled and loaded stores, some of which arrived from Quebec on a Desgagnés truck. 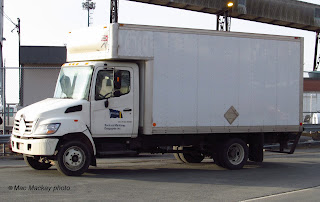 5. A Desgagnés truck waits outside the port gate this morning. The ship had to clear customs before taking on stores.

6. Sailing this evening, the true size of the ship's crane can be seen. It was used to load stores today and possibly a container, which can be seen right aft on the starboard side. There is also a side door  with a small crane immediately beneath the starboard bridge wing, below the riding light. It was also used to load material today.