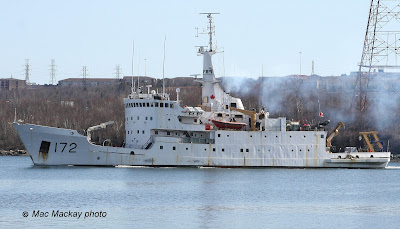 1. CNAV Quest heads for Bedford Basin this morning for a day of trials. Her four Fairbanks Morse engines are still warming up, with lots of white smoke from her (white) funnel. (This is not the ship's good side)

The newly rebranded Royal Canadian Navy (I won't mention its former names, which like Prince's are unintelligible) nonetheless is normally a respecter of nautical tradition. However I feel it is time to blow the bosun's whistle on a flagrant disregard for tradition in the case of CNAV Quest.
As a Canadian Navy Auxiliary Vessel (again, but, for a time a Canadian Forces Auxiliary Vessel) Quest does have an unusual parentage. Officially it was commissioned in 1969 as a hydrographic research vessel, but was assigned to the RCN for acoustical and other research for DREA=Defense Research Establishment Atlantic (now DRDC=Defence Research and Development Canada).
As previously reported at length, the ship was painted gray on the port side (and the funnel painted white) in 2011 for Q340 Radar Infrared  Electro-Magnetic Pressure Acoustic Signature Experiments, conducted with the German and Dutch navies. While this work may be a little removed from its hydrographic origins, the ship nonetheless still conducts water related experiments including ship under water acoustical signature work.
Following the Infrared tests, the side curtains and hull cooling pipes were removed and it was then that the unforgivable sin was committed. The funnel was repainted  left in WHITE paint. 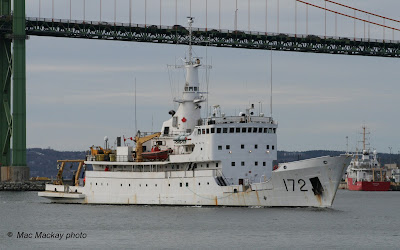 2. The day's trials completed, Quest passes CCGS Matthew at BIO - a formerly white ship too. (Quest's good side is to the camera in this photo)

Traditionally hydrographic ships have buff coloured funnels with black cap, as Quest did before the gray paint job.
3. CSS Acadia, celebrating her 100th anniversary this year carries the traditional colours of a hydrographic research ship.

Since this is the 100th anniversary of CSS Acadia's construction, and now the only ship left in the traditional Hydrographic Service colours, wouldn't it be nice if the RCN could find that old can of buff paint stored away in some forgotten locker and apply it to Quest's funnel. A little green boot topping would be nice too.

4. CSS Acadia when she was only 90 years old. She arrived in Halifax for the first time On July 8, 1913 - look for a major celebration this summer.


As a footnote the Department of Fisheries and Oceans, inheritors of the Dominion Hydrographic fleet, the Canadian Hydrographic Service, etc., repainted their white fleet in DFO/CCG colours in 1997. CSS Matthew based at BIO in Halifax is one of the last survivors of that white fleet.  Wouldn't it be nice to see her repainted white too? 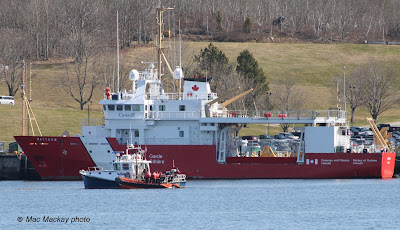 5. Graduating Canadian Coast Guard College cadets carry out RHIB training with RCMP Preventor off CCGS Matthew at BIO this morning. Matthew has had a red hull since 1997.
Posted by Mac at 9:19 PM