Dara Desgagnés - out of drydock

Dara Desgagnés emerged from the Novadock late this afternoon (with a shove by the tug Atlantic Willow) and headed directly for Bedford Basin to do a compass swing.
The ship arrived in Halifax March 28  http://shipfax.blogspot.ca/2013/03/dara-desgagnes-limps-into-port.html , and http://shipfax.blogspot.ca/2013/03/dara-desgagnes-makes-it-into-drydock.html with ice damage to her steering gear, which has now been repaired. 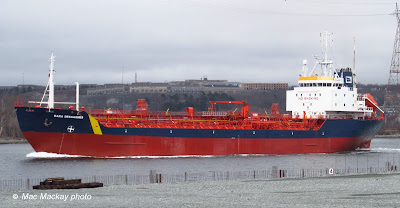 Following her compass swing, she was due to go the Woodside dock again, but now appears to have anchored in the lower harbour. Her stores crane (just aft of the funnel) is in the upright position, leading me to believe she will be taking on stores before she sails.
According to the Port of Quebec web site she is due there on April 22 to resume her charter to Ultramar.