The Egyptian flag bulk carrier Wadi Alarab is back in Halifax, this time for bunkers. Since it was here as recently as March 10 to 17, what has it been doing all this time, and where did its grain cargo go? It loaded some grain in March then went to Port Cartier where it waited at anchor for quite a long time and perhaps loaded some more. It then went up river, and was last reported anchored off Trois-Rivières. Somewhere along the line it managed to lose the grain that it had loaded.

The ship has a history however, so maybe it is just a hard luck case. Its first visit to Halifax was in April 2003 when it was anchored outside the port under quarantine. A crew member had died in Trombetas, Brazil of suspected anthrax, and as a precaution authorities disinfected the ship and made some tests. They found no sign of anthrax. Brazil then reported that the man died of unknown causes-but not anthrax.Wild reports that the anthrax was to be delivered to Canada as part of a terrorist plot were discounted. After five days at anchor the ship was permitted to sail on April 29, 2003 - ten years ago today - to La Baie, QC with its cargo of bauxite.

Then on December 25, 2008 pirates attacked the ship 50 miles off Yemen. The German warship FGS Karlsruhe dispatched a helicopter that scared off the pirates, but not before they shot one crew man. Another German helicopter evacuated the crew man for treatment. Karlsruhe then captured a motor boat with the six pirates, but freed them, citing German policy not to arrest pirates unless they attacked a German ship or German citizens. 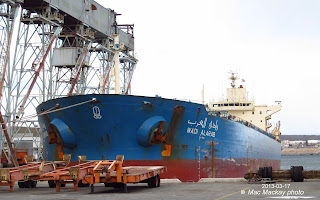 2. Wadi Alarab at pier 27 on March 17, shortly before sailing the last time.


While last in Halifax Wadi Alarab also made the news when there were reports that two crew members jumped ship, one on March 12 and one on March 17. The Canadian Border Services Agency did not address reporters questions directly, so we are not sure if in fact the reports were true. Police did question a man on a bus from Halifax headed for Montreal, when the bus stopped in Amherst. Again no one is saying what happened after that.

3. Sailing March 17 with a partial load of grain.

4. Sailing today, with no cargo on board.
Strange ship - strange stories, and strange missing cargo, and maybe missing crew.
The ship is now heading for Norfolk, VA, where it is expected to load a cargo of coal.

Later Note: I have it from a reliable source that the two "missing" crew men were back aboard when the ship sailed on March 17. One mystery solved.