I did not get to see Atlantic Navigator when it arrived today - too much fog! On one of Atlantic RoRo Lines rare Halifax calls, the ship berthed at Halterm. I was sorry I missed it because it has an interesting history, which ties in to Halifax.
Built in 1992 as an Astrakhan class general cargo ship with RoRo capability it was built as Kovrov for USSR owners, but was renamed Ever Vital in 1997 for a short time, before becoming Thorsriver in the same year. It was chartered to serve Christensen Canadian African Lines (CCAL) owned by A/S Thor Dahl, a legendary Norwegian company.
Founded in 1887 in Sandefjord, Norway, A/S Thor Dahl grew to have its own shipyard, A/S Framnaes M/V, and operated shipping lines to the Pacific and Orient, and operated a large whaling enterprise in South Georgia. In 1948 the company's owner Lars Christensen founded a new line to run from Canada to various African ports. Although based in Montreal, the company's beautiful white ships called in many Canadian ports to load export cargo, especially paper, and brought in fresh fruit, often calling in Halifax. The ships of CCAL were also distinguished by their huge bow crest which showed the god Thor (standing on a whale) and a funnel mark with a stylized whale.
In 2000 CP Ships purchased CCAL from A/S Thor Dahl but merged it into Lykes Line (which it had also acquired) and eventually sold the whole works to TUI, and it was folded in to Hapag-Lloyd. A/S  Thor Dahl still exits in Norway, but seems to have given up shipping to become involved in real estate and construction.Thorsriver was renamed Lykes Energizer in 2000 and was then returned to owners and became Atlantic Navigator.
CCAL had an offshoot called Christensen Canadian Enterprises which had ships based in Halifax. Two ships, built along trawler lines, were used in the annual seal hunt, but also carried out research work and participated in summer northern supply work to the arctic. Karlsen Shipping in Halifax acted as agents for CCE until the ships were sold. Karlsen also acquired two whale catchers from A/S Thor Dahl, which they operated also for sealing and research.
So today's arrival of Atlantic Navigator brought back some memories of:.
1. The magnificient Thorshope tied up at pier 39-40 in 1968. The pier is now buried within Halterm. Built in 1958 by the Thor Dahl's Framnaes shipyard, the ship was sold in 1978 and broken up in 1980. Note the painting stage at the bow - the ship's crew is touching up the white paint.
2. The 1977 built Thorscape was among the last ships built for CCAL. It came from the Mitsui yard in Tamano, Japan. It could handle general cargo, with four 40 tonne cranes, eight 10 tonne cranes (removed by the time this photo was taken) and a mighty 120 tonne Stülcken derrick. It could also carry 500 TEU of containers.
3. CCAL ships' bows were adorned with a huge bronze shield showing Thor grasping lightening bolts, supported by a pair of seahorses, with a whale beneath his feet. Regrettably in later years these shields were not as well maintained as they once were.
4. Funnels carried a stylized whale in the form of a letter "C" and a red star facing aft. The ship was sold at the time of CP takeover and eventually scrapped in 2003. 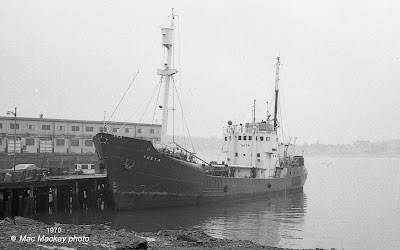 5. Theta, built in 1953, was one of the CCE ships based in Halifax. It could carry cargo, navigate in ice and worked as a sealer and researcher. Sold in 1977, the ship sank in Nicaragua in 1981.
6. The larger Theron, built in 1950 once reached 81 degrees north during a supply trip. It also had the whale symbol on its funnel, and a seal, with the red star facing aft. 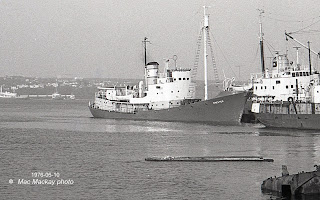 7. A/S Thor Dahl owned the steam whaler Thorfinn until 1966 when they sold it to Karlsen Shipping of Halifax. It was then renamed Chester, but still carried the Thor Dahl  funnel mark. It was sold in 1976 to west coast owners as a tour boat, then went to Micronesia.
8. Although built as the Dutch Inga Vinke in 1961, the whale catcher Thorarinn was owned by A/S Thor Dahl from 1964 until sold to Karlsen Shipping in 1970. When whaling was banned in Canada in 1973 the boat carried on with research work, becoming Goel No.1 for Karlsen's Geophysical Ocean Exploration Ltd in 1975. It was a total loss after grounding on Robben Island in Table Bay, South Africa in 1976. Note the whale gun ,mounted on the bow.
Christensen Canadian African Lines and A/S Thor Dahl were once well known names in Halifax. It is therefore with some nostalgia that I would have greeted Atlantic Navigator - had I been able to see it. It sailed this evening (still in dense fog) for Houston, TX..