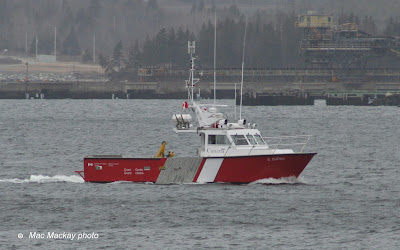 1. S.Dudka returning from trials this morning.

The latest delivery from Abco Industries to the Department of Fisheries and Oceans (DFO) conducted trials in Bedford Basin this morning. The boat was only recently delivered, and was registered in Ottawa on March 25. Measuring about 16m in length, it is powered by two water jets and can achieve 26 knots. S.Dudka, * built at a cost of $2.9 mn, will be based in Alberton, PE.
The boat was named for a well known DFO officer and native of Pictou County, NS, Stan Dudka. He was also a veteran of the Second World War, who was awarded the Military Medal for his service.
For more on Mr. Dudka, and his war time experiences read:
http://www.ngnews.ca/News/Local/2012-09-14/article-3075651/Coast-Guard-vessel-named-in-honour-of-New-Glasgows-Stan-Dudka/1
and:
http://www.ngnews.ca/News/Local/2012-09-18/article-3077456/Family-honoured-that-fisheries-ship-named-after-Pictou-Countys-Stan-Dudka/1 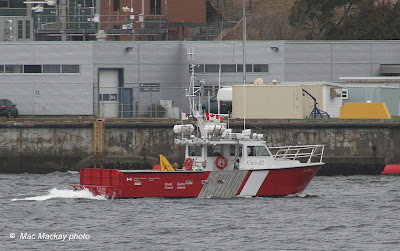 2. S.Dudka has a small crane on deck and protective sheathing on the hull for pulling lobster traps. A tubular frame on the stern protects the twin water jet outdrives. Its house also appears to have a small enclosed work area on the port side.

* Footnote:
What is it with DFO naming its new boats with initials only before surnames? If they are just trying to save paint it seems a fairly silly exercise. All these people had real first names, and previous DFO boats such as Alfred Needler and Wilfred Templeman  used both names and were better for it. Not only did those names signify real people, but they made a clear statement about just which people they were honoring.
Some used only family names, such as Parizeau and that lead to confusion with various other Parizeaus, some whom the government of the day might not wish to recognize quite so prominently.
I can't see anywhere in the regs that they can't use people's given names. I suggest that the DFO get out its paint brushes and do a proper job of naming its ships and boats.
For more on the DFO/ CCG naming policies see the following: